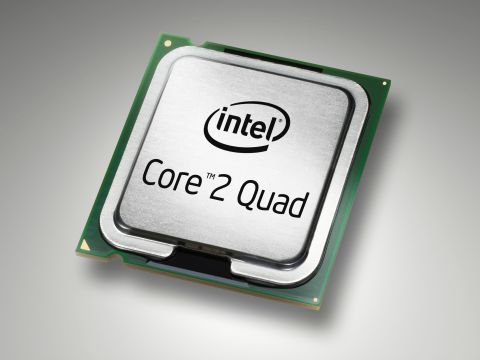 The Q9300: An awesome compromise between price and performance

As PC processors go, Intel's flagship Core 2 Extreme Edition PC chips are pretty sexy. In fact, they're the fastest CPUs you can buy. But they're not exactly cost effective.

That's precisely where the new Core 2 Quad Q9300 steps in. Based on Intel's latest 45nm production process, it assumes from the old 65nm Core 2 Quad Q6600 the role of entry level quad-core model. It's the best compromise between price and performance in the white-hot new 45nm range.

As a 45nm chip, it shares most of the advantages of the new Penryn architecture with its much more expensive siblings the QX9650 and QX9770 processors. One key Penryn enhancement is the addition of 47 new SSE4 instructions which promise a major boost in multimedia performance.

Other upgrades include a new Radix-16 Divider, to the benefit of all-round clock-for-clock grunt, and a Super Shuffle engine which bolsters floating point performance. Compared to the Q6600, the Q9300 gets a minor clockspeed bump from 2.4GHz to 2.5GHz. It also receives a faster 1,333MHz bus - handy for keeping all four of those power CPU cores fed with data.

More generally, the new 45nm process makes for chips that are more power efficient than equivalent 65nm models. And of course, the 45nm process has so far proven to boast bags of overclocking headroom. It all bodes extremely well for a smooth transistion from the Q6600.

However, the Q9300 does have one possible weakness. Intel has halved its cache memory pool compared with other 45nm quad-core models. Still, with 6MB it has twice that of AMD's competing Phenom quad-core processors. It can't be that big a downer on performance, can it?

Up against the Q6600, an 8MB model lest you have forgotten, it appears not. Those light advantages in core and bus frequencies along with the microarchitectural upgrades combine to ensure it has the edge on its relatively elderly 65nm sibling. Whether its gaming, 3D rendering or HD video encoding and decoding, the Q9300 carves out a small but significant advantage.

What'll she do, mister?

As for the Q9300's overclocking prowess, it's mostly good news. Using a decent Zalman copper cooler and running stock voltages, our Q9300 sample will run all day long at a rock-solid 3.37GHz.

The only question mark involves the combination of the 1,333MHz bus and locked 7.5 ratio CPU multiplier. The locked multiplier means overclocking must be achieved via the northbridge and processor bus. It's the same situation with the Q6600.

But thanks to the pumped up 1,333MHz bus, we can't help wondering whether we really got the most out of the Q9300. Hitting that 3.37GHz clockspeed means running the northbridge at 450MHz - quad pumped to an effective 1.8GHz. Even with the latest X48 Intel chipset, that's getting on a bit. We can't be sure the 9300's failure to boot beyond 3.37GHz wasn't as much down to the motherboard as the chip itself.

Check back over the coming weeks as we'll have further analysis of the Q9300's overclocking nous with the aid of water cooling, voltage tweakery and alternative chipsets. In the meantime, it's worth noting that even at 3.37GHz, it can't quite match the $1,000+ QX9770 3.2GHz Core 2 Quad model. It seems the QX9770's extra 6MB does come in handy after all.

But then the QX9770 costs nearly five times as much. Minor concerns over bus speeds and overclockability aside, therefore, the Q9300 looks like seriously good value.