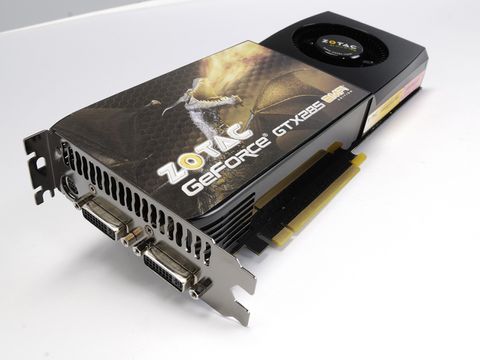 Expensive single-GPU cards are losing relevance to modern computing, unless you can afford to buy several together.

Nvidia doesn't do things by halves. At the same time as releasing the twin-engined GTX 295, it has tipped its lofty cap to conventional wisdom and released a single-GPU update to the GTX 280 as well.

Which effectively means that the GTX 280 has gone the way of the oft-referenced Dodo. In case you haven't put 10 and 10 together (got to love those binary jokes), the GTX 285 is said update.

So what's so new about the GTX 285? Nothing. Well, nothing logically anyway (same 240 stream processors, back-end and memory interface), physically it's significantly different though.

It's smaller, courtesy of a die-shrink - a die-shrink from 65nm down to 55nm. And as we all know, die-shrinks are good for components because it means you can crank up the clocks, reduce thermals and bring about world peace.

Zotac has jumped at the chance to give this new svelte core a seeing too, pumping the core from 648MHz right up to 702MHz, tweaking the shader clock a touch to 1,512MHz and pummelling the memory bus to operate at 2,592MT/s. It has slapped its AMP! Edition moniker on the box too - just so you can differentiate this spin of the card from the bog-standard edition (which can be had for a few less pounds).

What does this net you in real terms? A few frames per second and very little else. Nvidia already had the fastest single-GPU card out there, and all this release does is push that GPU a little bit harder. This is a fast card, but a few more frames don't make it any more attractive, especially in these cash-conscious times.

The problem is this GPU faces a particularly vicious two-pronged assault that it struggles to mount a real defence against (unless money really is no object, in which case buy three and douse yourself in 100% smugness). On the one hand there are faster cards out there – the 4870 X2 and GTX 295 to name but two – while the other flank is lead by better priced offerings in the form of the GTX 260 and 4870.

As a proof of tech, this is a fine card - Nvidia has made the shift to 55nm capably enough, eking a bit more performance out of its existing designs.

At the same time though, this in itself isn't a reason to rush out to buy a GTX 285, either at stock speeds or as a pre-overclocked monster such as this.

This is unfortunate for Zotac as it has done a commendable job here – it's a quiet running and a good package (GRiD's included). But ultimately it just misses the two important sweet spots, and ends up being surprisingly bland.