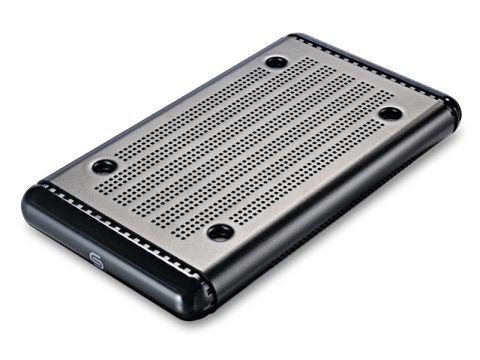 Slip your Drobo on top of the DroboShare and take advantage of Ethernet.

Expensive, but at least the modular approach means you can add to it when required.

We're excited about the Drobo, but the obvious question to ask is why Data Robotics didn't add Ethernet; with such a large, growing pool of storage in place, it makes sense to have it available to all users on a network.

And so was born the DroboShare, a slim sled that sits underneath a Drobo and gives it an Ethernet port so you can hook it directly to a router for everyone to share.

In keeping with the Drobo's mission to make things simple, the DroboShare is very user-friendly. It's easy to plug in - a neat connector splits the Drobo's single power cable in two - and an Ethernet and short USB cable are included.

If you're used to setting up more sophisticated NAS systems, you might be disappointed, as there's no provision for user- or group-level access privileges, but then again for those attracted to the Drobo system, open access or the single username/password authentication option provided should suffice.

The Drobo Dashboard software allows for the same management as if the drive were mounted over USB, and indeed one of the system's charms is that you can switch back and forth between USB and LAN connections to suit your needs. You can even have the drive formatted as HFS+ when shared.

Once it's set up, in theory you don't need to install the Dashboard on the other computers on the network, but we found that discovery of the drive was a bit hit and miss without it.

One caveat: the price. The AirPort Extreme Base Station (£61 cheaper) is even highlighted in the Drobo's manual as an alternative to the DroboShare, and it includes an 802.11n router; spec up a Drobo with 1TB drives and a DroboShare and it'll set you back £850.

A 1TB Time Capsule costs only £329 - while this doesn't include the Drobo's data redundancy, it does at least work with Time Machine.