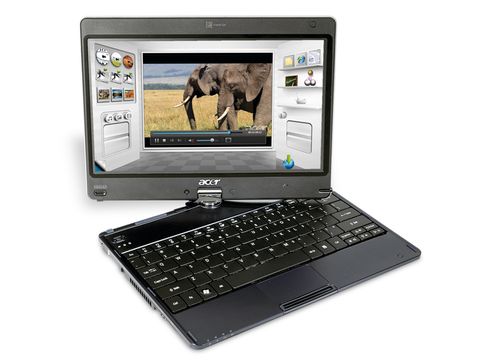 The swivel mechanism is well designed, and the inbuilt accelerometer auto-orientates the page for you

Drop the touchscreen, add a better GPU and make it £500 cheaper, then it'd be perfect

Forget your internals, it's all about two different techs: 3D and touchscreens. Everyone's gulping down 3D like it's a free pint of Guinness, but so far we just can't seem to find much of a use for it.

A couple of months ago Dave looked at the Albatron OTM, which despite sounding like a Hollywood sex robot, was a touchscreen monitor. It worked well, but it had few practical applications. It's great being able to literally hold the world in your hands and spin it round, but the novelty soon wears off.

The other problem with the devices we've touched so far is that they tend to be desk-bound: monitors and all-in-one systems. This is great if you want to wall-mount them in your fantasy kitchen that doesn't exist, but not so great when you find yourself leaning across your desk, at a weird angle, to use an interface that's probably never going to be as intuitive and responsive as a good ol' keyboard and mouse.

Acer's Aspire 1820PT, then, could be the Windows 7 device to change all that. Rather than being a monitor or all-in-one desktop PC, it's a kind of tablet-netbooky thing.

Open it up and it functions like a normal netbook, but there's a twist: you can rotate the screen and flip it back on itself and it becomes a tablet PC. Like Apple's much-vaunted iPad, only with a physical keyboard.

Acer has packed some beefy components inside this tablet. As soon as we see any kind of mini-PC of this format, it shouts "ATOM 1.6GHz!" at us. Literally. So we were surprised to find that it includes one of Intel's new- fangled, ultra-low-voltage Core 2 Duo processors.

These stats alone put it head and shoulders above the current splurge of netbooks, even if it is three times their price. HD video playback is impressively sharp on the screen and it felt like a spritely little machine. The included HDMI port means that displaying content on your whopping tellybox is nice and easy.

Also, battery life was incredible, with just under five hours of hi-def playback. Of course, this is an intentional battery draining test, so if you're merely using it for office work or web surfing you can expect a lot more from it.

It seems strange, then, that Acer has opted for a rubbish integrated graphics chip: Intel's horrid 4500MHD, which can barely muster a decent frame rate in World of Warcraft. Definitely not a gaming laptop then.

It seems Acer is going for that business market of people who wear nice shoes and have Blackberries and like nothing more than a great big Excel spreadsheet. Damn shame though, we'd love to get our hands on a touchscreen tablet capable of gaming, even if the touchscreen version of RUSE looks a tad befuddling.

It's all very well stuffing a laptop full of high-performance components – graphics chip excluded – but if you're selling it as a touchscreen device it had better have a bloody good one. The unfortunate truth is that the 1820PT doesn't have a good touchscreen.

It's hard to find out exactly what Acer has used here, but the horrific slight give in the screen as you press it, makes it feel like it's resistive rather than capacitive. If you know anything about touchscreen mobiles, you'll know that this is a bad thing. They're the reason you see people using stupid styluses with their Samsung phones.

This Aspire's touchscreen is responsive, though: it responds once it's cottoned on to the fact that you've pressed it and done the complete opposite to what you wanted it to. The onscreen keyboard is next to useless, as you're permanently hitting the key next to the one you wanted to press.

Windows 7 is an impressive touchscreen operating system, but here it feels fudged by the lack of a decent touchscreen. Part of the problem is that slight give when using the screen, so you can't tap it as you would an iPhone. It makes it feel quite squishy and cheap. It's also very, very shiny, and liable to pick up fingerprints. Before you know it, it'll look like a prop from CSI.

Could it be that the resolution is just too high for this to properly function in a touchscreen fashion? Millions of tiny pixels are nice, but when this, in turn, reduces the size of the icons – and the touch areas – it makes it a tad more difficult to use. It's true that you can increase the size of your icons and text, but who wants to make their laptop look like a SimplicITy PC? Aside from Valerie Singleton?

The screen swivel mechanism is ace and Acer has obviously put a lot of thought into its design. It's skinny, and the screen rotates into a tablet form quickly and easily. The 1820PT boasts an accelerometer, which means that the device will automatically tilt the screen when you hold it vertically or horizontally.

Acer has also included its own touchscreen software, which is activated by flicking up one corner of the screen. It's known as TouchPortal, and it lets you drag content, such as photos and videos onto a panel in the middle of the screen, then view or play them. YAY.

Acer has also included a few games, and Microsoft's own collection of touchscreen-specific applications, such as Blackboard, which lets you create weird physics-based machines.

It's nice to see a netbook that's actually pushing the boat out a bit; even if the boat is being pushed by an index finger across a rather insensitive touchscreen. It's a powerful little blighter, too, but we can't help feeling that the Aspire 1820PT is going to fall short next to Apple's similarly priced iPad.