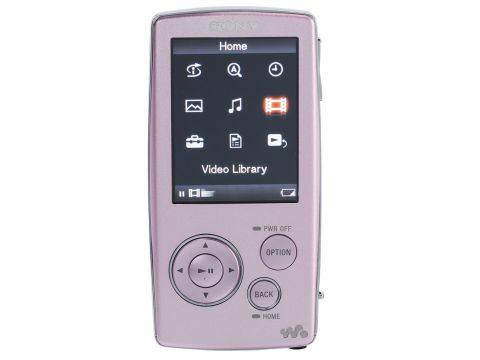 If considered purely as an audio device, its largely metal construction makes it moderately attractive

It's overpriced, but it's also well designed. The best Sony MP3 player for a while

Saying that Sony dropped the ball doesn't begin to describe quite how catastrophic the past five years have been for the company's forays into the post-Minidisc, portable music player market. The creator of the Walkman just didn't seem to understand menus, software and codecs.

At last, sanity has returned. This flash player (like all the others, available in 2, 4 or 8GB capacities) isn't quite the iPod Nano beater it hopes to be, but it has the normality and simplicity lacking for so long.

It's well constructed, it's small, its menus (based heavily upon the minimal, tried and tested style used by the PlayStation 3 and PSP) are straightforward and it doesn't demand that you convert your MP3s to some stupid Sony-made format.

Most of all, its desktop software, Sonic Stage 4, works - a far cry from the unbearable slowness and crashing of the infamous version 3. And considering it doesn't work with the safer bets of either Windows Media Player or iTunes, this is a big deal.

It's still fairly clunky and installs an unreasonable amount of startup entries, but it's not a disaster. Unfortunately though, like the iPods, you can't bypass the software and just drag and drop music to the player.

Mercifully, converting movies (to the same AVC or MPEG-4 formats used by its brother Sony portable, the PSP) is straightforward. Whether you'll actually watch movies on it is another matter. The 320 x 240 resolution is impressively sharp on such a small screen, but its size and susceptibility to glare means an inevitable headache from extended viewing.

If considered purely as an audio device, its largely metal construction makes it moderately attractive. It also sounds reasonably good, and includes some decent bundled headphones. Displaying album art thumbnails as you browse your library, rather than just for the music currently playing, is a nice touch, too.

Unfortunately, the traditional Sony overpricing strikes again: it's more expensive than its rivals and like the iPod Nano doesn't include a radio or recording functionality. It's visually covetable, but whether that and the Sony name is enough to make the increased cost justifiable depends very much on you.

One thing to bear in mind if you're tempted is that the buttons are a slight annoyance. Time and again, Sony's players seem designed with a Japanese audience in mind, which results in tiny controls that some Westerners may struggle with.

It's alright if you're standing still, but trying to get the right edge of the weeny directional pad while you're being jostled about on the Tube can be a fight. The 30-hour battery life does compensate for this if you make a lot of long journeys, though.

All told, it's the best Sony player in quite a while. A new version with a larger, brighter screen and revamped buttons would make this a major contender.