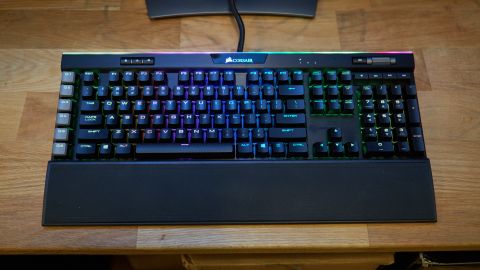 The Corsair K95 RGB Platinum is a stunner with the most RGB lighting ever, redesigned keys, convenient shortcuts, a comfy wrist rest and an equally high price to match its high-end features.

Now that we think about it, Corsair could just be responsible for bringing RGB keyboards into the mainstream, and now its best keyboard to date, the K95 Platinum, elevates gaming keyboards to a new level with an integrated light bar. The Corsair K95 Platinum also provides 16.8 million color options, covering basically the entire keyboard, and it also comes equipped with Cherry Speed switches, 8MB of memory to store profiles and a military-grade aluminum frame.

However, you should consider that the high $199 (£179, AU$349) price tag that this elegance brings with it. It’s a ton of money for a gaming keyboard. And, while the Corsair K95 RGB Platinum is an attractive keyboard with a ton of features – Corsair’s ‘iCUE’ software is still a pain to use.

At its core, the K95 RGB Platinum shares relatively the same shape, design and aluminum build as its predecessor, but there are key differences.

The most obvious change here is the fact that the Corsair K95 RGB Platinum is much narrower, thanks to the number of macro keys being reduced to just six. Some might not like this lesser amount of macro keys, but be honest – you’ll actually be able to reach them this time around.

However, this keyboard still kills it when it comes to shortcut buttons. You have a volume wheel, media controls, lighting toggles and gaming modes all within easy reach. Despite the cheaper, $179 (£159, AU$279) Logitech G910 Orion Spectrum, we prefer the simpler setup of Corsair’s flagship.

Now that the Corsair K95 Platinum has dropped down to just six macro keys, it’s more in line with more affordable options, like the $169 (£159, AU$199) Razer Blackwidow Chroma.

Still, even though the macro keys have been cut down, users will still be able to program up to three sets of macros, all of which will be stored on the keyboard’s 8MB of built-in memory. This makes it much easier to just bring the keyboard to a friend’s house or gaming event and instantly feel right at home.

Corsair’s overly complicated software has always been painful to use, but it has gotten better over the last couple years. Corsair Utility Engine (CUE) now offers plenty of templates to have colors pulse, wave and rain across the keys.

Other than that, you can dive into some extremely technical level of creating custom color profiles, but this is where Razer Synapse takes the lead from a usability perspective. At the very least, users can retreat to community-created templates to build and learn from there.

Fortunately, creating macros is a lot easier, and CUE gives you a ton of tools to make custom keystrokes.

Everything in its place

The Corsair K95 RBG Platinum comes with possibly one of the best wrist rests ever bundled with a keyboard. Made with the same military-grade aluminum as the peripheral itself, the wrist rest offers plenty of support.

Meanwhile, a reversible and magnetic rubber pad offers a smooth micro-finish on one side and a rougher texture on the other. Unfortunately, this wrist rest also easily attracts dust, crumbs, oils and all manner of detritus – so, it requires almost constant cleaning.

Corsair has also added an “X” arrangement of two-cable channels molded into the underside of the keyboard. Interestingly, they’re not made for routing the peripheral’s own cable, but keeping your headset wire (or anything plugged into the dedicated USB passthrough) out of the way.

Lighting, of course, has been upgraded significantly with a new 19-zone light bar that runs along the top of the peripheral’s frame. It’s a gorgeous, if superfluous, touch – we’re mostly impressed with the way colors wash across Corsair’s transparent logo.

The K95 RGB Platinum follows in the footsteps of Corsair's K70 RGB Rapidfire keyboard in its focus on speed. Featuring Cherry's new, linear MX Speed switches, the keys are highly responsive and take just a light press to actuate.

In fact, the switches actuate with just 1.2mm of movement and 45g of force.

Basically, this means that the keys will bottom out faster and require less pressure, making them well suited for twitch shooters or any game that requires fast reflexes. They might take some adjustment when it comes to normal typing, but this keyboard is at its best when playing games anyway.

The Corsair K95 RBG Platinum really is the Rolls Royce of gaming keyboards both in its styling and its $199 (£179, AU$349) price tag. Even though it feels a little less special with only six macro keys, no other keyboard matches it with a classy all metal build quality, handy shortcut buttons or disco lighting. If you can stomach the price and complex software, the Corsair K95 RGB Platinum is well worth its premium price.