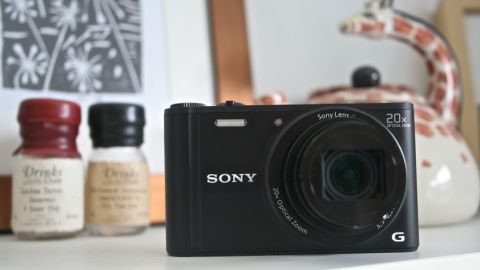 The WX350 offers a 20x optical zoom in a slimline body

Great zoom, beautiful colors and consistent performance makes the Sony WX350 a worthy addition to the Cybershot line up.

An update to the 2013 WX300, the Sony Cybershot WX350 is available in black or white, is lighter than its predecessor by 20 grams and comes with a new Bionz X image processor and the ability to record movies in full HD.

The specs for the WX300 and the WX350 are near identical, as they both have a 3-inch 460K-dot-resolution LCD screen, a 24-1200mm (equivalent) Sony G Lens with 20x optical zoom (increasing to 40x digital zoom using Sony's Clear Image Zoom technology) and an 18 million pixel sensor.

Built-in Wi-Fi, NFC connectivity and Optical SteadyShot image stabilisation are all core features of the WX350, along with its backlit Exmor R CMOS sensor and G lens, which work together to produce sharp shots even in low light.

NFC connectivity means if you have a compatible device, then simply touching the two devices together will start an instant connection, while the Wi-Fi technology will allow you to use your smartphone as a remote control, if you have one.

The WX350 benefits from having the same BIONZ X processor as top-of-the-line cameras like the A7 and A7R. That should make the camera perform better in low light conditions, and make processing times quicker, than in the previous generation.

With five shooting modes including Program Auto, Superior Auto and Intelligent Auto, 14 Scene Modes (such as Portrait, Pet Mode, Anti Motion Blur and Landscape) and a dedicated Panorama Mode, the WX350 should appeal to anyone looking for an easy-to-use compact camera that has a good selection of functions.

The Sony's 13 Photo Creativity filters will be familiar with regular users of Instagram or Flickr, as they include things like High Contrast Monochrome, Retro Photo and Illustration – great if you like to play with the look of your photos.

People who are looking to just 'point and shoot' will like the WX350, as the majority of the settings are chosen for you in the Superior and Intelligent Auto modes.

There is some autonomy available, as Program Auto gives you the option of controlling white balance, sensitivity, focusing and metering, although it won't give you control over shutter speed or aperture. Sensitivity on the WX350 ranges from ISO 80-12800, but you can only manually control it up to ISO 3200. Anything higher than that can only be set automatically by the camera.

Competitors for the Cybershot WX350 include the Canon Powershot SX600 HS, which has a 16 million pixel sensor, slightly lower 18x optical zoom and a significantly cheaper price tag than the WX350, and the Nikon Coolpix S9500, which has 22x zoom and can take high speed movies and shoot stills in 3D.

Solid, smart and good-looking, the Cybershot WX350 is a sleek compact camera with a beautifully designed exterior. Light enough to hold in one hand with no issues, the outer casing feels very durable, and it's slim enough to fit into the pocket of even a tight pair of jeans.

While we didn't find it particularly problematic, the flash is situated on the front left, which could potentially be obscured by fingers – it's something to bear in mind when holding the camera. The rest of the buttons and functions, however, seem to be well placed and easy enough to reach.

Shooting mode can be changed via a scrolling dial on the top of the WX350, while image settings, camera and Wi-Fi settings are accessed via the menu button. The LCD screen is large and clear, taking up the majority of the space, although this makes the buttons feel rather small.

There's also a scroll wheel on the back that can be used to cycle through some of the settings or photos during playback, as well as a four-way control pad that gives access to timer and drive mode, display settings, flash and the Photo Creativity art filters.

Oddly, you can't access the full set of filters unless you're in Program Auto Mode, during which they're not accessible via the Photo Creativity button (as they are in all the other shooting modes). Instead they are buried in the main menu system.

While image previews straight after a shot is taken can appear to be very noisy, when viewing via the playback button or on a computer they are much sharper. This can be adjusted by setting the display quality to 'high' in the setup options, although this will decrease battery life, so leave it on standard if you want to save your battery.

We had a couple of issues when trying to connect to the Wi-Fi during testing. We found that it was easy enough to send photos to a smartphone using the companion app, but trying to control the camera via a smartphone was more problematic and only worked 50% of the time.

When it does work, however, you can use your smartphone to adjust the zoom, self timer and flash, and you can choose to save the photos to your phone as well as on the camera, which is pretty useful.

The instructions to set up the Wi-Fi could be a little clearer. It isn't very obvious that you need to download an app in order to be able to transfer photos back and forth, as it's not mentioned in the on-camera instructions.

If you've never used a Sony camera before, you may need to spend some time familiarising yourself with the menu system, which can be a little tricky to navigate at first as there are quite a few sub-menus and headings to scroll through to find the setting you want.

Thankfully, Sony has taken the decision to unify all of its menu systems, so if you've used a camera from its DSLT or CSC range, you'll likely be more at home. Although this is the type of camera that you'll often use in fully automatic mode, if you do want to take control of certain settings, it's not the quickest.

Once you get used to the quirks of the WX350 it's relatively simple to find your way around, but it's worth noting that there are very few shortcuts available if you want to change setting quickly. It's a shame there isn't a function menu like there is on other Sony cameras, as this would probably make it quicker to adjust settings when needed.