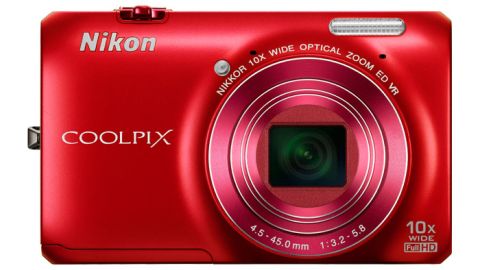 Overall, we have been very pleased with the images produced by the Nikon Coolpix S6300. Pictures appear sharp, with lots of detail and with vibrant colours that aren't overly saturated.

The 16 megapixel sensor is able to capture an impressive amount of detail, making it good for a variety of different subjects.

A 10x optical zoom is very flexible for a camera that fits comfortably in a pocket. Images shot at the telephoto end of the zoom lens are sharp, with lens shift vibration reduction seeming to do a good job of keeping blur from camera-shake to a minimum.

Autofocus is quick and, in the majority of cases, accurate. When shooting with automatic AF point detection, the Nikon Coolpix S6300 does a reasonably good job of judging which area of the scene should be focused on. Having the ability to switch to manual AF selection is a fantastic addition, and is especially useful for shooting subjects such as macro or portraits.

Macro focusing is only promised from as close as 10cm, but we found on several occasions that the camera was able to focus closer than that, making this particularly useful for shooting frame-filling subjects such as flowers. When shooting macro images, an attractive shallow depth of field is achieved, with a smooth loss of detail producing very pleasing effects.

Generally, metering is very good, even when presented with mixed lighting conditions. There's no opportunity to change the metering mode, with the camera using 256-segment Matrix (sometimes known as evaluative, mixed or general metering) in the majority of situations, only changing to partial or spot metering when engaging the digital zoom.

Examining images from the Nikon Coolpix S6300 at 100%, or actual pixel size, does reveal some smoothing in areas where noise reduction has obviously been applied. However, given the unlikelihood of users of this camera wishing to make very large prints, we can't see this being particularly problematic. Loss of detail is hardly noticeable when viewing images at A4 or under, or at web sizes.

Many modern compact cameras include artistic digital filters, and the Nikon S6300 is no different. There's a couple of good filters here, a particularly effective one being High Contrast monochrome.

Other manufacturers provide a more extensive range of filters, so unfortunately this camera is not particularly special in that respect. It's also a little surprising to see the almost ubiquitous Miniature effect missing from the shooting menu, since that seems to be a selling point of many other cameras.

For those not satisfied with the filters offered in the shooting menu, there are others that can be applied post-capture. These include Fish-eye and the aforementioned Miniature. With very little control over the parameters of these filters, don't expect anything too amazing to result from their use.

Panoramic mode is something that is starting to appear in more and more compact cameras. This enables an ultra-wide angle image to be produced by sweeping the camera across a scene. There are different ways this can be achieved. On the Nikon Coolpix S6300, a video is shot as the camera is moved across the scene, with the resulting wide image extracted from that.

Sony has been a pioneer of this technology, and we're sad to say that this Nikon version isn't particularly well executed. The low-resolution image looks reasonable when viewed at web sizes, but when increasing even slightly, you can see many examples of smoothing and loss of quality. It also fails to stitch correctly on occasion.