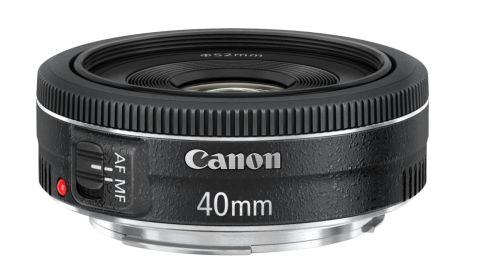 The Canon EF 40mm f/2.8 STM lens is designed with filming in mind

According to Canon UK's David Parry, Canon's USM lenses are a better choice for stills photography because they focus more quickly, but their movement tends to be too jerky for video recording. That's not to say that STM lenses can't be used when shooting stills, but their slower movements mean they are not the ideal choice for shooting sport scenes.

The new lenses are ideally suited for use with new Canon EOS 650D/Rebel T4i, which is the first EOS camera to feature full-time autofocusing in Live View and Video mode. This is enabled by the 650D's Hybrid AF system, that uses both phase detection and contrast detection autofocusing in video and Live view mode.

The camera has dedicated phase detection pixels on the imaging sensor that are used to get the subject close to being sharp before the contrast detection system brings into full register.

We were able to use a pre-production sample of the Canon EF 40mm f/2.8 STM lens on an early sample Canon EOS 650D/Rebel T4i, and we found that the subject drifts smoothly into focus in 'normal daylight' conditions. The speed of focus seems ideal for many video situations.

In low light we noticed the occasional backwards and forwards adjustment in focus that is typical of contrast detection systems, but in decent light the system worked extremely well and homed in on the subject decisively.

Canon UK didn't have a sample of the EF-S 18-135mm f/3.5-5.6 IS STM lens to show us, but this lens offers a versatile focal length range that is likely to suit many amateur DSLR videographers. Helpfully, it also has Canon's Dynamic Image Stabilizer, which is useful in video mode for smoothing out camera wobbles that occur as you walk.

Meanwhile, as an EF lens, the Canon EF 40mm f/2.8 STM can be used on full-frame cameras such as the 5D Mark III as well as APS-C format DSLRs, on which it gives a focal length equivalence of 64mm.

The Canon 40mm f/2.8 STM lens is a pancake lens, so it is quite short and it looks very neat mounted on the new EOS 650D. With a maximum aperture of f/2.8 it is also quite a fast optic, and it's capable of producing images and videos with fairly shallow depth of field.

Although it's not an 'L' lens, the new 40mm Canon optic feels nicely put together and has a reasonable weight.

We found that its focusing motor was much quieter than the 18-55mm kit lens sold with many of Canon's APS-C format DSLRs. Naturally we will want to test this properly when we get a full production sample in, but on the basis of the time spent with the early sample, we think that it should be possible to shoot video and focus automatically without the sound of the AF system spoiling the footage.

We will also be investigating the focusing action very carefully, but it certainly seems much smoother for video than with Canon's USM lenses.