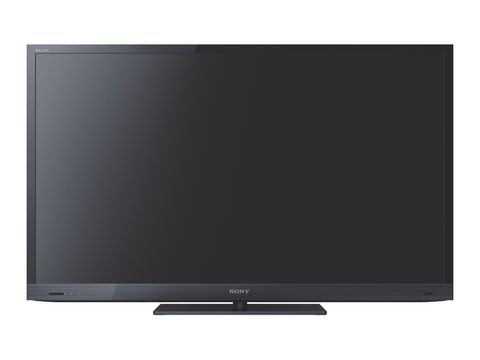 Sony's 32EX723 looks on paper as if it's generously specified for a TV that only sits around the centre of its price range. Among its headline-grabbing tricks are 3D playback (with the necessary IR transmitter built in), Sony's impressive Bravia Internet video platform, plenty of multimedia playback support, optional Wi-Fi via a USB dongle, and even a brand spanking new X-Reality picture engine.

Connectivity is prodigious, and its edge LED lighting system helps it deliver an enviably slender form, as well as playing its part in producing a pleasingly contrast-rich image.

Its 2D pictures are generally very likable, with believable and decently punchy colours, only minor motion blur and high detail and clarity levels. However, if you're thinking of getting the 32EX723 for its 3D capabilities, you should think again. As well as its 32-inch screen not being big enough to make the experience come to life, the 32EX723 also suffers quite severely from crosstalk noise, which makes 3D viewing unconvincing and tiring.

The TV's 2D pictures are clean and punchy, with sharpness increased by the new X-Reality processing engine, especially where standard definition is concerned.

X-Reality also does a good job of keeping a lid on video noise, and black level response is unusually good for such a small LCD model.

The new operating system is also a big improvement, the set's multimedia facilities are excellent and the video-centric approach to online features represented by the Bravia Internet video makes a lot of sense.

The amount of crosstalk in the 32EX723's 3D pictures is startlingly excessive, showing little if any improvement from last year.

The internet browser feels pointless, thanks to the smallness of its text and the torture of navigating a busy website via the remote control, and the audio is nothing to write home about.

As a 2D TV, there's much to like about the 32EX723. The new X-Reality processor does a good job of making both HD and standard definition pictures look sharp and detailed, while the Motionflow system stops motion suffering badly with blurring or judder. And it does this without leaving the picture looking artificial.

The edge LED illumination is well controlled too, enabling the TV to combine punchy bright elements with deep black levels without suffering any truly distracting levels of backlight inconsistency during dark films.

Multimedia fans will appreciate the support the 32EX723 gives there, while the Bravia Internet video system delivers a persuasive argument for focusing on smaller but more relevant content offerings.

The problem is that the 32EX723's 3D pictures really don't pass muster at all, making the TV feel slightly expensive for a 32-inch model that's ultimately only recommended for 2D viewing.