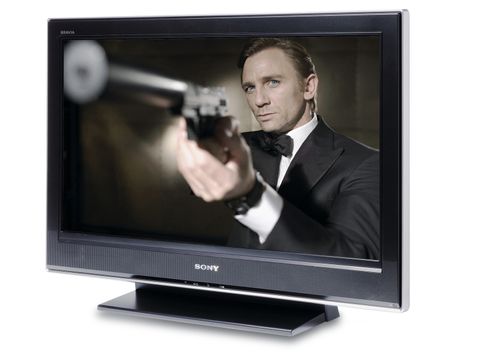 Smooth and slick pictures from this Sony LCD

Excellent hi-def pictures, despite the comparatively high price for this 32in TV

As befits the first HDTV out of Sony’s stable to use 24p technology, the high-definition pictures that the KDL-32D3000 dishes up are of a very high quality. But this 32in LCD TV is also just shy of the £1,000 mark – expensive when compared with some other competitors.

To bust the jargon, those thinking that 24p is the price should get their coats now: the KDL-32D3000 can handle video at 1080p and 24 frames per second (fps). If you’ve embraced (or are planning to embrace) Blu-ray, it’s worth noting that Sony is one of the few manufacturers to have launched a Blu-ray player that can output 24p.

Blu-ray and HD DVD store movies at their natural speed, unlike DVD discs, so with compatible equipment you can watch movies just as the director intended. The upshot? Say hello to incredibly smooth high-definition images.

Not the Full Monty

Other vital statistics include a contrast ratio of 1,600:1, quoted brightness of 450cd/m2, and the consumption of 0.4W of power in standby mode. The last figure alone could have the KDL-32D3000 on born-again eco-warrior David Cameron’s Christmas list.

Connectivity also impresses: three HDMIs top the bill, backed up by two Scarts (both RGB-enabled) and component video inputs. There’s also an optical digital audio output, so you connect the KDL-32D3000 to a home cinema system.

The best news is that once we hooked up our 24p compatible Sony Blu-ray player, and set our Casino Royale disc on its mission, the KDL-32D3000 doesn’t disappoint. The 24p pictures on display here are as smooth and slick as a Bond chat-up line: HD DVD and Blu-ray pictures judder when displayed on most HDTVs, but here they are displayed in satisfyingly cinematic style.

Black levels also hit the mark, often a problem for LCD TVs, and the TV’s backlight is also adjustable, so you can get strong blacks without greying over in the dark. The colour palette is also top drawer, with particular accolades going to the realistic tones of reds and greens – again often the bugbear of many an LCD TV. All in all, it’s a confident high-definition performance.

A hotshot in the dark

Despite the 24p technology, the experience feels more like an hors d’oeuvre rather than a feast – we want to see 24p strut its stuff on a larger, Full HD screen. Until then, the KDL-32D3000’s great hi-def pictures, capable standard-def performance and decent audio will have to do. You can’t ask for more from a 32in LCD TV, despite the price.