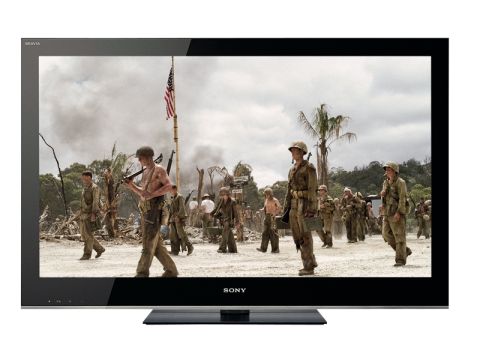 The Bravia KDL-40HX703 boasts Sony's new Monolithic design, with the screen sporting a fetching single-layer, black-edged fascia, and the facility to tilt backwards.

It uses a so-called Deep Black Panel, too, in a bid to further create the impression that it is some kind of smaller brother of 2001: A Space Odyssey's mysterious black monolith.

Connections are excellent. Four HDMIs get the ball rolling, but we also lapped up an onboard Ethernet port providing access to files on a DLNA PC, or Sony's Bravia Internet Video online platform. Further multimedia support comes from a USB port able to play music, photo and video files.

The Bravia Internet Video system is quite groundbreaking because of the sheer volume of content it provides. Highlights include full HD movies via LoveFilm, YouTube; EuroSport and even Demand Five (Channel Five's 'iPlayer').

Also excellent is the picture performance. Unlike previous Sony LCD TVs, the 40HX703 doesn't suffer with backlight inconsistencies, leaving you free to revel in the impressive black level response.

The 40HX703 also scores a palpable hit with the sharpness of its HD sources, which contain oodles of fine detail and enjoy a really crisp finish, but suffer no video noise.

The crispness is further boosted by the impressive 200Hz processing, which keeps judder and motion blur to a minimum without generating hardly any unwanted processing side effects (provided, of course, you stick with the 'MotionFlow' system's Standard setting).

Colours are superb, too. Tones look vivid but exceptionally natural, while blends are stripe-free and skin-tones avoid the patchiness or waxiness that's so common with budget flatscreens.

Pictures also suffer from considerable contrast loss – and a curious purple undertone – if watched from an angle as slight as 35°, and the set's sound struggles to accommodate action scenes thanks to a lack of bass and slightly cramped mid-range.

But it's still a great TV, especially if the groundbreaking video streaming tickles your fancy.