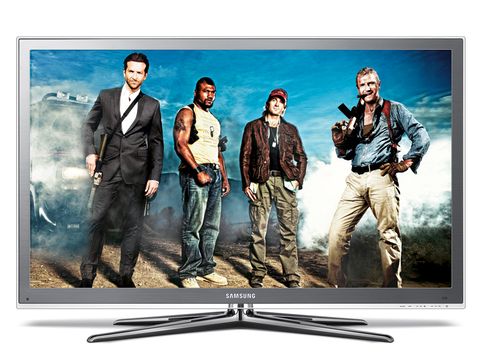 The design of this TV is something to behold, and that's before you turn it on

Samsung got the UK's 3D ball rolling in solid fashion with its UE40C7000 a couple of months ago. But we're hoping that its more glamorous and larger sibling, the UE46C8000 will launch the brand into the same kind of stratosphere occupied by Panasonic's 3D debutante, the Panasonic TX-P50VT20.

The UE46C8000's compatibility with all the key new 3D formats is obviously its dominant feature, but it also boasts a so-called 3D HyperReal Engine that's claimed to deliver significant performance benefits over other brands.

Some aspects of this engine are too complicated to fully explore here, but for starters, Samsung has added a scanning backlight to its existing 200Hz engine – delivering an effect that some rival brands would most likely call 400Hz. This should enable it to reproduce motion with greater clarity.

Also key is a dual black insertion system, where frames are inserted between the alternating left and right 3D frames to reduce the ghosting phenomenon that's commonly known as crosstalk.

Samsung has developed a special high-speed pixel-driving circuit for the 46C8000, too, along with an ultra-fast 1.05Gbps high speed interface, to reduce LCD's usual, response time issues.

The 46C8000 also integrates a 2D to 3D conversion system, so that users can watch conventional discs and broadcasts in three dimensions until there are more true 3D sources available to buy.

The design is a feature in itself meanwhile, with a gorgeous, shiny silver metal bezel to the fore and an exceptionally slender rear end, courtesy of edge LED backlighting. Samsung has introduced a local dimming element to the latter, whereby segments of the edge lighting can have their brightness individually adjusted if the TV detects obvious areas of discrepancy, to boost contrast.

Inevitably, the set is complex to use, due to its sheer number of features.

Among such important features as various LED Motion control circuitry and the local dimming option, Samsung has added one or two unnecessary and confusing submenus without adequately explaining them.

The menus are clear and attractive and the glinting remote is as easy to use as it is gorgeous.

The 3D pictures really are an advance on those of the C7000. This is particularly true where motion is concerned, with the moving image components suffering markedly less from resolution blur and crosstalk.

Another contributory factor is that the 46C8000 doesn't suffer as badly as the C7000 series with backlight inconsistencies. The pictures are fearsomely bright and vibrant, too, exploding off the screen with 2D footage, but also, crucially, retaining good brightness when watched through Samsung's 3D glasses.

The 46C8000's 2D to 3D converter is more effective than expected, creating a sense of real depth without generating as many glitchy effects as anticipated. However, it's still a diluted 3D effect, and as such we question the wisdom of the feature's inclusion.

The TV is also highly accomplished with non-3D material, exhibiting outstanding colours, loads of detail with HD, good upscaling with standard-def and good noise and motion handling. However, the motion and noise reduction processing should be used judiciously to avoid side effects.

The general black level response isn't as profound as we'd ideally like, and the local dimming engine creates obvious 'blocks' of light, so we chose to leave it deactivated. But otherwise, the 46C8000's pictures really are terrific.

While the 46C8000 represents a vast improvement over Samsung's previous flat TV generation when it comes to sonic ability, it's still short of bass and fails to deliver an expansive soundstage during action scenes.

However, it sounds fine with ordinary TV and, given its price, would quite likely be accompanied by a separate sound system when watching more demanding fare.

While undeniably expensive against standard 46in TVs, it does feature extensive multimedia support, a stunning design and a large amount of innovative 3D technology.