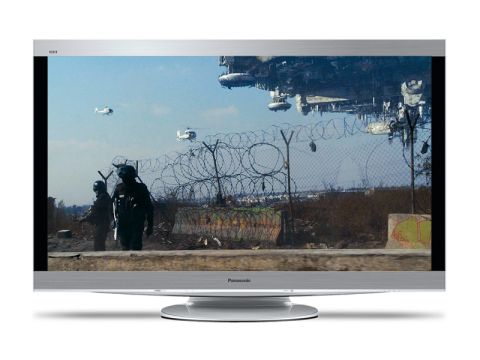 You can watch the TX-P54Z1 from almost any angle, which is something you won't find on an LCD TV

HD images and sonics are superb. But is that really enough to justify £4,500?

At first glance it's hard to believe that the TX-P54Z1 is a plasma TV: the chunky, dour looks that tend to define the technology are conspicuous in their absence here.

Pleasingly, the TX-P54Z1 has more in line with slinky LCD models. Particularly remarkable is that this TV is just 25.7mm deep, even out-slimming Samsung and LG's recent edge-LED TVs.

Some of this remarkable slenderness can be explained by the fact that the the set's three tuners – Freeview, analogue and Freesat – are built into an external tuner/multimedia box, ideal for wall-mounting. You don't even need to physically connect the multimedia box: it connects wirelessly, with full 1080p HD signal support.

The only unfortunate thing about this system is that it's external, requiring a separate transmitter, and an external receiver bolted onto the TV's underside. The multimedia box also carries four HDMI inputs, an SD card slot for playing video or photo files, and an Ethernet port for streaming in PC files, or logging in to Panasonic's nicely presented – if not content-heavy – VieraCast online service.

This plasma is THX approved, complete with a THX-calibrated picture preset, so it's no surprise to discover that it's a superior big-screen performer. At least with HD…

Fed a good Blu-ray, the TX-P54Z1 delivers a dazzling array of talents, dominated by a superb black level response. This avoids almost all the greyness associated with many flatscreens and reveals immense amounts of shadow detailing, enhancing the believability of dark scenes. Colours look rich and punchy, during darker scenes, too.

Unlike most LCD TVs, this plasma doesn't need to dim its overall brightness level to produce a good black level response.

Devil in the detail

More surprising is how exceptionally sharp HD pictures look, with every last pixel of detail reproduced faithfully and noiselessly.

This sense of total clarity isn't done any harm by plasma's innate freedom from the sort of motion blur issues associated with LCD technology. Even judder is largely kicked into touch, thanks to the on-board 600Hz processing engine.

That processing also earns its keep by rendering high-definition colours with mesmerising subtlety, so that pictures look more three-dimensional and natural.

Pleasingly, this plasma screen is watchable from nearly right angles without any loss of image quality – another feat most LCD TVs can only dream about.

So, what's our beef with this TV? Why just a four star rating? Well, the main problem with the TX-P54Z1 is that its pictures lose their way with standard definition, leaving them looking rather soft and oddly affected by a few strained colour tones.

Also, this plasma doesn't have the sheer brightness of contemporary LCD TVs either, particularly post-calibration. This won't matter if you're putting the screen into a reasonably dark room, however.

Accentuating the positive once more, pictures are accompanied by remarkably powerful sonics from a pair of 'bolt on' speakers, defying the screen's slenderness by delivering bags of treble detailing and even a healthy splash of bass.

So, as long as you can feed it a predominantly HD diet, the TX-P54Z1 is undeniably terrific. But, we're still not entirely convinced that it stands out from the crowd quite enough to justify its extremely hefty price tag.