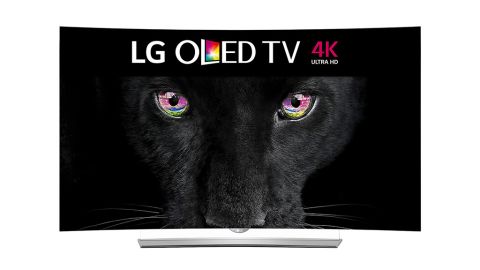 In brightest day, in blackest night, no pixel shall escape your sight. Boasting both 4K resolution and OLED technology, LG's EG960T provides sensationally deep blacks and amazing colours. This is the current high-water mark in televisions.

When it comes to televisions, there's no finer technology currently available than that of the Organic Light Emitting Diode.

We've all heard the hype about incredible contrast ratios and unsurpassed brightness – but does the fancy-schmancy OLED acronym really improve the television watching experience?

And, more importantly, does it justify the added cost? Add to that the other hyped-about TV tech of the moment, 4K (or Ultra HD), as well as a slightly curved display, and you've got yourself a whole bunch of home cinema buzzwords of the moment – all of which can be used to describe LG's jaw-dropping EG960T series of televisions.

Having spent some time with the 65-inch model, we can honestly say that this is one awesome slab of next-gen tech. As the only television manufacturer currently on the Australian market that can boast both 4K resolutions and OLED technology in its displays at the same time, LG has reached the top-tier of display tech for the here and now.

One of the things that you'll likely notice right away about LG's 4K OLED is just how remarkably slim it is. It has a depth of around 5mm, with a bulge lower down the centre of the TV's chassis on the rear. You don't have to worry about that, though – it's not exactly chunky, and it's kept away from interfering from the slinky sides.

This belter is also curved or contoured – call it what you will – though it's not as severe a feature as it might look.

While the curved vs flat display debate has raged ever since the introduction of the first concave HDTV, the argument is unlikely to get people riled up with regards to the EG960T – its curve is much more subtle than all of the other curved displays we've seen, which lets the set immerse you in the action, without being distracting.

What is this 65-incher's standout feature? It certainly has a few to choose from. You could pick the OLED panel, the curved design or the Ultra HD 4K screen resolution of 3840x2160 on their own and still take the cake from the majority of sets on the market.

Add them all together, and you have a force to be reckoned with. Its user interface is an updated version of webOS (2.0), which is noticeably faster than before, allowing you to browse Netflix and YouTube for stunning 4K content. You'll likely be spending a lot of time in those two apps until 4K content becomes readily available elsewhere.

The EG960T doesn't come in a non-curved model, which is a bit of a shame since not everyone is entirely convinced of the added immersion benefits that these displays provide, though the curve is at least more subtle here than it is on competing sets – you can even wall-mount the EG960T without it looking weird. The addition of a filter also helps cut down on annoying reflections seen on other curved screens.

Its audio is taken care of by an Ultra Surround Sound module by Harman Kardon, which is quite loud, if not particularly bassy or impactful. If you're going to go all out by picking up the most advanced TV on the market, you're likely going to want a proper 7.1 TrueHD or Dolby Atmos setup to go along with it.

As well as Freeview HD digital tuners, WiFi and Harman Kardon speakers, the EG960T is 3D-ready, too, and comes with four pairs of the same passive 3D glasses given out at your local multiplex.

However, if forced to choose the feature that stands above the rest, we'd have to go with its OLED panel. It sports LG's four-colour Pixel WRGB technology, which adds a white subpixel to the usual red, green and blue mix.

Unlike LED and LCD displays, OLED doesn't require a backlight, letting the set's self-lighting pixels do the heavy lifting. Because of this, individual pixels turn off completely during dark scenes, allowing for true blackness on the display.

This isn't that 'almost black' that standard TVs usually get away with, where you can still see that the screen is on – OLED makes your TV look like it's completely switched off during black scenes.

This 'perfect black' makes the bright colours that shine out of the darkness stand out even more, offering unprecedented detail that's made possible due to the EG960T's infinite contrast ratio.

The lack of a backlight means that the EG960T's viewing angles are quite extraordinary. While it's not ideal to view a curved television from the side (another reason why flat screens will always be preferable), you'll be glad to know that there's no backlight leakage to be found on this set, allowing it to maintain exceptional colour, clarity and brightness when viewed from any angle.