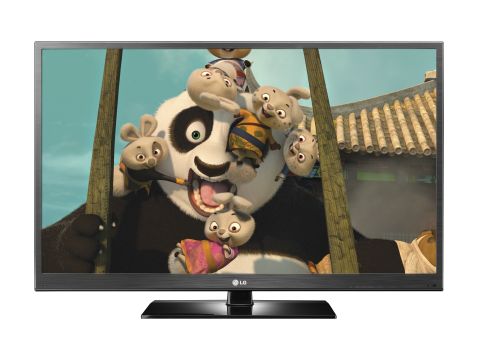 Images are crisp and clear on the 42-inch plasma screen

Given all the fuss LG has made about the benefits of passive 3D TV, you'd be forgiven for thinking that the Korean brand had turned its back on the active shutter system. Not so. And even more surprising is that the company's most affordable TV over 40 inches, the 42PW450T, uses active shutter glasses.

This may seem like an odd decision for a 42-inch product with a spec sheet that has clearly been pared down to get the price below £600, but LG thinks that the words 'passive' and 'plasma' do not mix.

Just as well really, when we're dealing with a panel that has fewer pixels than most 3D screens. The 42PW450T's mere 1024 x 768 resolution wouldn't be best suited to the halving in resolution that the passive system imposes on its 3D images.

Also not found on the LG 42PW450T are any kind of Smart TV services. Of course, these can be added easily and affordably from elsewhere if that's what floats your entertainment boat.

Full marks to the 42PW450T's design team, who have managed to give this gas-powered TV a contemporary look. The dark grey brushed metal finish (aka hair line texture) might not be to everyone's taste, but the narrow Razor Frame bezel, clean lines and overall svelte appearance are the hallmarks of an edge-lit LED screen rather than the chubby plasma screens we're more used to.

Perhaps the most noticeable imperfection is that the grey screen is reflective, but then again, not unexpected at this price.