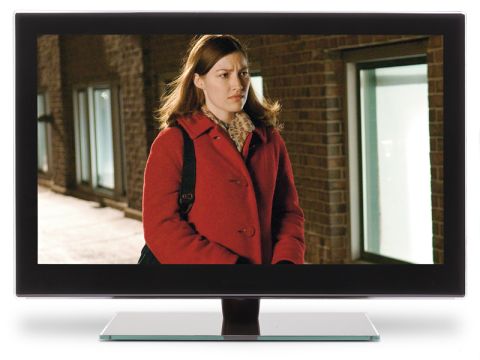 This is one of the best looking LCD TVs we have ever seen. One for the style concious

Gorgeously styled set with features galore and a lovely palette, let down by iffy motion and occasionally weedy blacks

It's big, it's purple and it's only wafer thin. LG's latest boundary pushing screen, the 42LE7900, with its subtly plum-tinged frame and improbable profile, is jaw-droppingly lovely to look at and comes packed full of some the most exciting spec of any telly available today.

This set has every gadget you could possibly need and then a few more sprinkled on top for good measure.

Most excitingly, it has Freeview HD brains built in, which means you won't need a digibox ever again. It also sports LG's NetCast web-browsing 'widgets', wireless capability for use with various media files or cord-free headphones and four HDMI inputs.

It's also lit with LEDs, which, aside from enabling that miraculously slender chassis, provide much more efficient illumination than standard (CCFL) units.

It is, of course, full HD, features 100Hz digital scanning and has no fewer than two USB inputs for enjoying video or photos from external sources.

LG's tile-based design is still our favourite operating system, with an effortlessly intuitive architecture enabling setup and tweaking to be as quick and superficial or as painstakingly exacting as you prefer.

The picture settings 'wizard' is particularly helpful for anyone disinclined to spend afternoons fiddling with gamma or black stretch.

The remote, while not too pretty, is sensibly arranged and sits comfortably in the hand.

Video performance is a fairly straight split between the outstanding and the disappointingly ordinary.

From the former category you'll enjoy some of the best colours on any LCD television currently available, exacting detail from hi-def sources, an impressive sense of depth and scope and decent scaling.

These are counterbalanced, regrettably, by so-so black levels and surprisingly amateurish motion handling.

To start with the good stuff, though, the palette is a treat. It's bright and cheerful by nature, but reins itself in where required to produce one of the most rounded displays of colour reproduction you'll see this side of plasma. Whether it's the lower reaches of digital television or the most demanding Blu-ray movie, everything is rendered with a degree of naturalism and accuracy that is utterly immersive.

Witness the summery meadows at the beginning of Inglourious Basterds, for example and compare the woozy evening sunlight therein to the convincingly begrimed tones of the titular outlaws' woodland hangout a few scenes later; both are handled with a fidelity that would do a cinema credit.

The tonal authenticity is supported by a degree of detail that manages to work inadvertently against the film's carefully contrived 'vintage' feel, making some of the action seem too real.

Cheap digital broadcasts are scaled neatly; they don't look anything like HD, but the images are stretched out to 42in without much in the way of artefacting.

It's a shame, then, that the blacks aren't terribly persuasive. The edge-mounted LEDs are all too visible in scenes of near or total darkness and undermine whatever contrast or profundity might otherwise have been achieved.

Movement is also disappointingly clumsy. Whether you're watching broadcast, DVD or Blu-ray, there is discernible noise around anything that moves, particularly during camera pans.

The sound produced by this unfeasibly slender display is probably marginally better than you'll be expecting.

All the usual flatscreen caveats (lack of bass, unconvincing pseudo-surround modes) apply to the usual extent, but there is a surprising amount of volume at your disposal, with 'low geared' adjustment (represented by a neat wheel in the bottom right hand corner) providing gentle incremental increases, rather then the usual inaudible/acceptable/hideous din progression usually found on LCDs.

Crank it too far, though and things become shouty and unpleasant and the sound image tends to be rather flat in nature, which is fine for television, but a bit cramped for movies.

Anything in excess of a grand is big money for a 42in screen these days, but the relatively high price must be set against the LE7900's wealth of features, almost watertight futureproofing and radically lovely styling.

This isn't a set for true videophiles, though: the underwhelming black levels and occasionally substandard motion handling cost the set a fifth star and an unreserved recommendation.

One for well-heeled and forwardlooking gadget fans who prefer style over technical finesse.