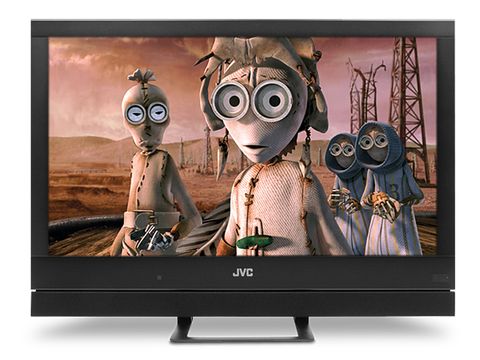 Pictures are as ravishing as the design – some of the time

A beautiful TV with great tweaking options and great colours, but the backlight inconsistencies and handling of fast motion let it down somewhat

No surprise, then, that JVC is looking to shift it through custom install channels rather than normal high-street outlets.

Also striking is the 32WX50's finish: a rather fetching deep grey aluminium with an optional industrial-style table-top mount and detachable speaker bar.

Comfortably, the 32WX50's most stand-out feature, though, is its truly stunning slimness. At its thinnest point it's just 6.4mm deep. That makes it a whole 3 and a bit mm – count 'em! – thinner than last year's Sony 40EX1 groundbreaker. Even the bottom third only 'balloons' to 25mm – still markedly slimmer than Samsung's iconic B8000 LED series.

The screen's slimness aids its custom installation ambitions too. For a screen this thin could be much more easily incorporated than a standard LCD TV into wall, ceiling and shelf AV systems, or fitted using, say, picture frames, railings, interior suspension units, or mirrored chests.

Whether the 32WX50's incredible slimness is enough to justify the screen's mammoth price depends on how design-obsessed/well heeled you are. But I suspect that for most people, the 32WX50 will need to do more – so let's find out what features the slender chassis holds.

Connections wise, the only findings are two HDMI inputs, a PC RGB input, RS-232 control support, and USB/SD multimedia options. There's no tuner input, because there's no tuner in the screen! It's merely a monitor – which is, of course, entirely acceptable in custom installation circles.

Also part of the new DynaPix HD engine is a Chromaticity Point Conversion Circuit, designed to compensate for colour bleed and colour drift caused by gaps between the source colour format and the LCD's own colour space.

DynaPix HD now incorporates Intelligent Clear Noise Reduction processing, too, which detects and reacts to picture noise in each of a picture's 16 frequency areas, as well as Intelligent Colour Management, which uses a newly-developed algorithm to emulate how people are drawn more to the colours of key objects than they are the colours of surrounding objects.

Another interesting ability of the 32WX50 is wide colour gamut coverage. The screen can tackle a full 100 per cent of the sRGB colour spectrum, and around 90 per cent of the Adobe RGB spectrum. This should let it reproduce digital photographs with unprecedented (in the TV world) colour accuracy. There's even a Photo Pro picture preset, designed for D-SLR stills.

Other presets include Game, Theatre, Dynamic, Standard, Monitor and even separate HD and standard-def CCTV options, plus digital signage and medical display settings for commercial applications.

As well as the aforementioned picture presets, you get six separate memory slots for storing your own settings. And among the vast quantity of things you can change are such niceties as the BY gain and BY/ RY angle of the hue setting; separate detail, horizontal and vertical sharpness adjustments; extensive backlight adjustment; colour matrix, temperature and space adjustments; white balance fine-tuning using 'Drive' and 'Cutoff' values for the red, green and blue colour elements; and comprehensive colour management. This latter tool lets you adjust the colour and hue of the red, green, cyan, and yellow components, as well as the hue and colour of skin.

Why? First, the picture isn't as sharp as I'd like, especially when it comes to standard-def viewing. Skin tones look slightly waxy, and there's sometimes quite pronounced motion blur, no matter what settings you use.

My other concern is with the black level response. On paper the quoted 4,000:1 native and 80,000:1 dynamic contrast ratios look okay. But in action, the screen's edge-LED lighting system causes distracting light pooling in each corner.

Frustratingly, its failings stand in stark opposition to some startling strengths. For instance, the sheer range of colours the screen produces is, for my money, unprecedented on a 32in TV. With skin tones in regularly watched Blu-ray sequences I witnessed subtleties of tone in different parts of people's faces that I haven't seen before at the 32in level.

Similarly, subtle blends like auras around planets and stars, or the varied shades of red in a sunset sky, are delivered with extraordinary precision. This is striking with digital stills, where the detail, subtlety and accuracy of the 32WX50's colour rendition is simply exquisite. The exceptional subtlety with colours is also used to render colours with uncannily accurate tones.

Somehow this colour accuracy even extends to dark pictures, aside from the way deep blacks look rather grey. While the 32WX50 might not be the greatest screen at suppressing motion blur, it is very accomplished at keeping a lid on judder, leaving images from all sources looking fluid and smooth – but not unnaturally so. The viewing angle is wider than that of most LCD TVs too.

One last string to its bow is audio. For despite being as slim as the thickest part of the screen's slender form, the provided speaker bar kicks out much more clarity, volume, dynamism and soundstage size than most 32in LCD TV speaker systems.

There is much to admire about the 32WX50 – and I'm not just talking about its startling design. JVC has clearly poured its heart into making the 32WX50 a custom installer's dream, with no stone of set-up flexibility left unturned. And when its pictures are good, they're stellar.

That said, I'd hoped for almost flawless pictures for £2,500. Yet the 32WX50's backlight consistency and motion blur issues ensure that 'almost flawless' is certainly not where its pictures are at.