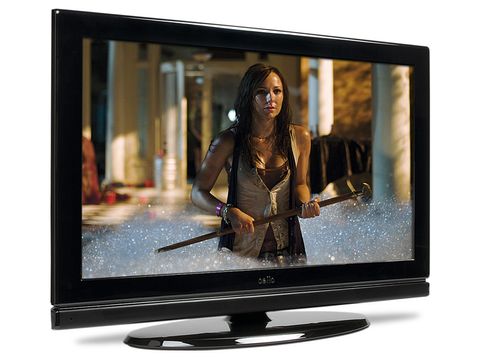 SD recording is good, but overall it's destined for the bargain bin

Although this certainly isn't the first time we've seen SD slots on a TV, the C2698DVBR LCD TV from Cello is the first that is capable of recording Freeview to SD card.

Also available in 22 and 32-inch versions, the 26-inch model boasts HD Ready status, with its slightly unusual panel resolution of 1,440x900 pixels giving it a screen size ratio of 16:10, rather than the conventional 16:9 widescreen.

Not only does the TV feature a built-in DVD player, it's also equipped with twin slots for SD cards.

Recordings are made as MPEG2 files, which will only give you about 40 minutes of recording time on a 1GB card, whereas two 32GB cards will offer over 40 hours of recording.

But although using cards with higher memory capacities is the best choice, these are not provided with the TV (no SD cards are provided whatsoever) and will set you back an extra £65 or so each. All of a sudden, the bargain price isn't looking quite so rosy.

Using SD cards means that the files can be easily transferred to a computer, although of course if your PC or Mac doesn't include a video-capable SD port, you'll need an additional card reader.

The twin Freeview tuners make it possible to record two programmes at once or to record one channel while watching another. The ability to pause and rewind TV is also a compelling feature on a TV of this price.

The onscreen menus feature functional yet rather uninspiring graphics, with relatively small text that can prove tricky to read. Thankfully they're otherwise well laid out and logical. What's more, in addition to the usual user guide you get in the box, there's also a colourful, large-print and completely idiot-proof brochure explaining the TV's recording functions.

The remote control bears a very strong resemblance to Sky's zapper, featuring an ergonomic design and rubberised finish that make it very comfy to use. The colour-coded buttons are clearly labelled, but sadly it's not the most responsive remote around.

The screen is surprisingly bright, making it a good choice for well-lit living rooms or conservatories. The viewing angle isn't that wide, but the adjustable stand does enable you to swivel the panel left and right.

Freeview pictures are recorded in the same ropey quality that they're broadcast, while pictures from the built-in DVD drive are also a little disappointing. There is blurring on even slow-paced moving images, and a significant amount of banding around light objects.

Black scenes avoid the tendency to grey over, but detail and texture is hard to make out. On the plus side, colours are reasonably bright and realistic.

There is a slight improvement when hooking up a Blu-ray deck, but it's clear that the screen is not suited to Blu-ray's 1080/24p output.

Sound is decidedly average and severely lacking in bass, depth and general dynamism. However, we can't mark the TV down too much for its mediocre sonics since most of its similarly sized rivals don't fare too much better.

Available from Studio and Ace catalogues or under the Soundwave brand from Freemans and Grattan catalogues, this set is certainly aiming at budget-conscious consumers. The same technology is also destined to be sold under the Murphy brand from Littlewoods Direct and also in Marks & Spencer.

While a budget price tag and the SD card recording are compelling selling points, it's difficult to fully recommend this TV as your money could be better spent on a panel with superior picture performance.