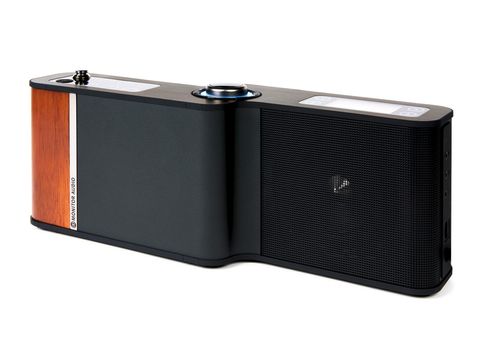 One might perhaps wish for stereo speakers and an iPod dock. However, the range of features on offer is certainly impressive – a great way to listen to the world

The smart and compact Monitor Audio AirStream 10 looks futuristic and classic in appearance, is actually one of the most all-round capable audio devices we've come across in quite some time.

It receives DAB and FM radio and thanks to the wonders of wi-fi (or, if you prefer, a wired Ethernet connection), it receives Internet radio and accesses music on your home network, via any suitable router – we used a BT Home Hub for review purposes.

If that's all a bit too new-fangled for you, you can always plug in a portable music player or other source via the auxiliary input.

Some of this is easier to set up than other bits, but if your computer has at some point in its life been set up to belong to a network, then it should be pretty straightforward to get the AirStream to connect and recognise music files.

Connecting to Internet radio is effortless, though the delay in 'tuning' in to a station can be a bit trying – this isn't a function of the AirStream though, it's caused by the need for buffering data which takes some time.

The AirStream 10 can sit on the long thin face opposite the control buttons, or on the largest face so that the speaker faces downwards, about 2cm from the supporting surface. In the case of the latter, treble is bound to suffer a bit, but the buttons are more accessible – certainly if you are using the unit as a bedside alarm or radio.

Operation is simple and, in fact, the automatic sorting of Internet radio stations by genre, location, and name, is just about the best way we've found yet of trawling through them. Some of them have a distinctly ropey quality and 24kbps MP3 is obviously nothing remotely to do with hi-fi, but we did find some perfectly sonically acceptable examples from Azerbaijan and The Philippines, to name but two.

The fun is, pretty much literally, endless! Given the point already made about treble with the speaker facing downwards, we did most of our listening with it facing out, on or reasonably close to its axis.