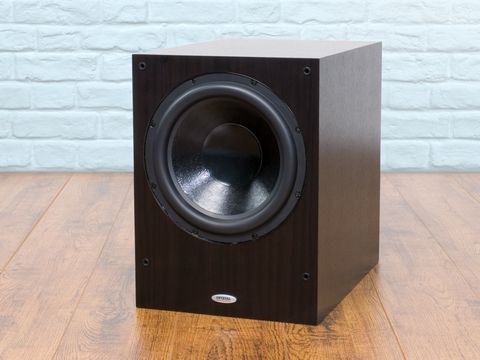 No messin’: A 12in driver does the business without a fuss

The THX Select badge is a revision of the THX programme, and came about in an effort to acknowledge that, in Europe at least, we have smaller viewing rooms than in the US. By engineering power supplies to fill small-capacity rooms, component costs can be reduced. In the world of home cinema, THX is a Gold Standard.

The whole idea is to get products to perform together with commensurate levels of output, so that a THX-rated system in all its parts would add up to an experience the filmmakers would approve of.

As THX drove the home cinema scene globally, the need for manufacturers to buy into THX licensing was huge, but it does add to the cost of the product.

In these later years, however, manufacturers are endeavouring to produce THX-certified products that needn't cost the earth regardless of the expense of the license. Crystal Audio is one and this subwoofer is the bigger (12in) of two THX Select-rated subs in the Greek company's range.

It's remarkably simple to setup in comparison to the other subs in this test: if you have a THX front-end and speakers, then all the sub needs is a phase control switch for 0-180° and a volume knob. And it's all this has on the back; one knob and a couple of switches.

Unfortunately, though, in this instance, one of these switches was grubby and actually caused a crackle when I used it. I have seen switches like this on car amps and they allow dust in.

On a unit that has as much air puffing around as the THX-12SUB, they're probably not a good idea. However, once set and working, you'll never touch them again, so maybe it isn't worth getting upset over.

I cranked the volume all the way up so I could use the output level control on my reference Acurus ACT3 amplifier, and played more of Pirates of the Caribbean: Curse
of the Black Pearl.

The THX-12SUB clearly has considerable muscle. The scene where the skeleton pirates take an underwater walk (around 104 minutes in) came through the Crystal's 12in driver a treat.

This THX-Select subwoofer from Crystal Audio is a bit swollen in tuning at the deep end, yet it can still drop incredibly low and with quite a whack of power.

Design-wise - well, it's a 'plain Jane' and a bit featureless. But that THX label means it does exactly what it says on the tin. I mean box.