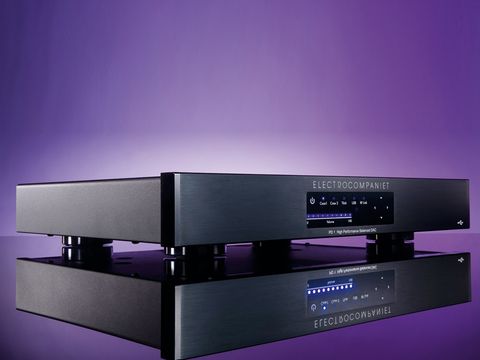 A decade or more back, the rationale for buying an outboard DAC was to upgrade the performance of an older CD player or transport with the latest digital technology. However, now that many current CD players offer upsampling to 24-bit/196kHz as standard, such reasons no longer seem convincing.

But, wait; what about a DAC that has balanced analogue outputs, plus the ability to access and play music stored on a hard drive? Not only do you get the promise of improved sound, you can now link your ripped music to the hi-fi .

Like many recent digital products, the PD 1 is based around a 24-bit/192kHz digital-to-analogue convertor. The incoming digital signal (say, 16-bit/44.1kHz from Red Book CD) is converted to this higher specification by something Electrocompaniet dubs ASRC (Asynchronous Sample Rate Convertor).

A high-precision master clock is used which it's claimed, virtually eliminates jitter at the output – so, even if your sources contain timedomain errors, they're quickly zapped.

Prior to processing, the USB input is likewise converted into standard S/PDIF format by the sampling-rate convertor – so it's similar to the other inputs. Audio information from the USB data stream is extracted using low-jitter PLLs (phase-locked loops) and output to S/PDIF.

With the sample-rate convertor being 'clocked' by an ultra-accurate reference device any remaining timing errors are further reduced, resulting in an output that is accurate and jitter-free.

Analogue and digital sections feature individual power supplies for reduced interference. The power supplies for the analogue output stage and DAC employ ultra low-noise tight-shunt regulators, which the maker claims results in a more open and transparent sound, due to reductions in spurious noise. As a result of these measures, the PD 1 effectively 'cleanses' all digital signals that pass through it.

Digital inputs include: 2x S/PDIF (coax via an RCA phono plug); 1x S/PDIF TOSLink optical; 1x USB Type 2; and an RF wireless link for use with the optional EMS 1 music streamer. The S/PDIF inputs support 24-bit/192kHz sampling, while the USB and RF options are 16-bit/48kHz.

There are two sets of analogue outputs: unbalanced (single-ended, RCA phono plugs) giving 1.7-volt output and balanced (XLR) giving 3.4-volt output. This output is variable. The maker claims distortion is less than 0.003 per cent from 20Hz to 20kHz, with noise levels 140dB below peak output over the same bandwidth.

The unit is supplied with an infra-red remote control handset that allows input switching and volume adjustment, plus mute and standby. There are additional Play, Pause, Stop and Fast Search buttons for those using their PD 1 with an Electrocompaniet CD player.

The illuminated front panel keeps you informed regarding the input selected and the volume level set. You've a choice of two brightness settings and there's an 'off' position if the glare of blue LEDs becomes distracting.

It might be imagination, but the sound seems a tad cleaner with the display off – though, the difference is very small!

The PD 1 is a solidly made unit that's nicely styled. The front panel is made from alloy, while the casework is steel. All the various controls are touch-sensitive types, so it's not really possible to talk about the 'feel' of the unit as such.

Internal circuits look neat and tidy. There's nothing here to make you gasp with astonishment, yet neither is there anything to cause concern or disquiet. There's no undue emphasis on cosmetic appearance, or extravagant 'luxury' build; you'll choose this unit for its performance and features, not its facade!

Mechanically, the unit is virtually silent. Put your ear up close and there's a barely audible hint of transformer buzz, but you have to be right on top of the unit to hear anything. There are no switching thumps to worry about, either; when using the RF Link the unit mutes if no signal is detected.

We connected our review sample to a Shanling SCD-T2000 SACD player. This features a 24-bit/192kHz Burr-Brown PCM 1738 DAC and should, therefore, be quite close to the PD 1 in digital terms.

However, we heard an immediate difference: essentially, the Electrocompaniet delivers a cleaner, more detailed sound. While the tonal balance hardly seems to alter, the PD 1 definitely produces a tauter, more focused sound that seems to project the music with greater presence and immediacy.

On solo piano, for example, there's definitely an enhanced sense of space and separation, so subjectively the notes start and stop with increased alacrity. Although the PD 1's unbalanced analogue output is slightly lower than the Shanling's – around 1.7V compared to 2V – the PD 1 actually sounds bigger and better-able to project the music, thereby creating a more holographic 'out of the boxes' sort of result.

The PD 1 focuses your attention on the music and performance. It enhances the impression of commitment – making it sound as though the players are involved and concentrating. Used alone, the Shanling seems a tad less disciplined musically. With the PD 1, everything suddenly becomes keener and more precisely focused; more alive and awake. Brass rasps; cymbals shimmer; voices sing out and rock bands rock.

All early comparisons were made using unbalanced analogue outputs, as the Shanling does not offer balanced. Via the PD 1's balanced outputs, the sound grows dimensionally. It's bigger; bolder; with increased separation; a palpably heightened sense of scale. Yet the end-result feels natural too; it's not pumped up or inflated.

Of course, with balanced, the output level increases by between 3dB to 6dB, which is significant in itself. But, even after you've reduced volume levels to bring things back to an equal footing, the sound is still bigger and bolder. It's definitely more assertive and displays increased depth and separation.

Essentially then, the PD 1 offers a two-pronged improvement. Its low-jitter digital conversion and high-performance DAC results in a cleaner more focused sound, while balanced analogue outputs deliver increased scale and dimensionality. The result is a very worthwhile sonic improvement – even over a good one-box player.

There's more. Add the EMS 1 music streamer (£250) and via iTunes you can access music stored on your computer hard drive. Connection is made wirelessly to the PD 1 and currently digital conversion is at 16-bit/48kHz – though it's possible that 24-bit/192kHz conversion may be offered at some future point.

The quality of sound from CDs ripped to a hard drive and conveyed to the PD 1 via the EMS 1 is fine – clear, open, lively and detailed. However, you need to save the disc in a high-quality format like WAV for best results. Saved as AAC, the sound is still good, but seems thinner and slightly lacking in richness and refinement.

Without doubt, the facility to play music stored on your computer hard drive – with a lack of fuss and drama – is alone as persuasive a reason as any to invest in a PD 1.

The PD 1 is an excellent product, delivering worthwhile upgrades in sound quality and user-convenience that many users will appreciate.

As a DAC, it should provide an audibly cleaner, more detailed sound over most one-box CD players. And, if you're able to utilise those balanced outputs, the improvement will be even greater.

Then there's the added benefit of being able to access music stored on hard-drives via the PD 1's USB socket – with the advantage of a wireless interface using the optional EMS 1 music streamer.

It all adds up to a compelling package at a realistic price – indeed, we're sorely tempted to buy one; it's that good!