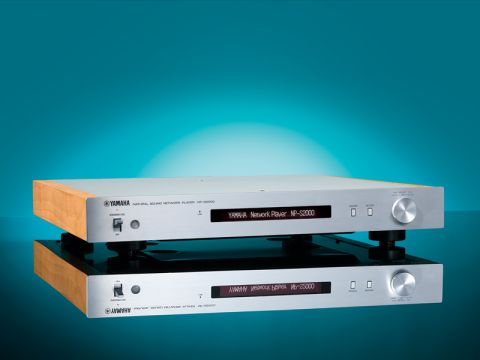 It performs very capably and, in short, seems a definite winner

You can tell that Yamaha means business with its first-ever network player the moment you lift the new NP-S2000 out of its box: its overall appearance being one of slimness and sophistication, which is probably why its considerable weight comes as a real surprise.

And it's only then that you spot other audiophile touches like the adjustable spiked feet and magnetic spike protectors. These and the balanced XLR connections on the rear panel suggest that someone truly wanted to make this a leading contender in the world of high-end network audio players.

A world in which it will be competing with the likes of the Marantz NA7004, the Arcam Solo Neo and digital streamers from both Linn and Naim.

The NP-S2000 is a particularly fine-looking beast – with its minimalist slim-line fascia disguising the complexity and capabilities that lie within the casework.

Like the Marantz, but unlike the Arcam, the Yamaha does not (despite its weight) provide an integral amplifier; there are just line-level connections to hook it up to a pre or integrated amplifier and a digital output for connection to a DAC.

We used the latter, because while the analogue stages sounded fine, as they ought with an individual Burr-Brown PCM-1792A DAC in each channel, we thought that the digital connection through a Naim DAC sounded particularly enjoyable and refined.

The Yamaha will play ripped/downloaded music from a media server or PC on the network, as well as from a NAS (Network Attached Storage) device that is DLNA (Digital Living Network Alliance) compatible.

This is why Yamaha thoughtfully provides a licensed copy of TwonkyMedia to be installed on your media server or NAS, from the software bundle on its download site.This also includes a network search utility and a link to the iPhone/iPod Touch app.

The graphical interface of the latter is definitely the best way to control the player and is, in our opinion, far superior to the remote control or using the fascia buttons, which are somewhat restrictive (especially if you have many thousands of tracks stored on your server) two-line display. You can also have a similar interface surface on a web browser on your PC or Mac, provided it has access to the same network.

The NP-S2000 will handle all the usual music formats at rates up to 96kHz and bit depths of 16-bit and 24-bit: – WAV; FLAC; MP3; AAC and WMA files are all supported, but Yamaha wisely recommends using WAV and FLAC for optimum quality sound.

While WAV might be preferable to some, it does have 'issues' with not supporting tags, so we stuck with FLAC files, which support Vorbis Comment-style tags. The player will handle all, but the highest resolution files currently available. There really are not that many 24-bit/192kHz files in circulation at the moment; 24-bit/96kHz currently seems to be the most popular high-resolution format.

When you have heard all the networked recordings you wish to hear, the player will also connect to internet radio and use the vTuner database. The player can also provide access to your iTunes library if you have TwonkyMedia installed alongside it.

Like the less expensive Marantz NA7004, the NP-S2000 offers balanced audio outputs. Many feel that such connections are redundant in a domestic audio environment, but at least they offer a consistent balanced connection throughput to the Yamaha high-end A-S2000 amp or a similarly equipped amplifier for people who value it.

The seemingly bullet-proof build quality, along with the stylish appearance, inspires great pride of ownership and confidence in the NP-S2000. Under the lid, dual transformers feed discrete power supplies that run the analogue and digital circuitry independently, so minimising the transfer of noise between the two stages.

There is a toroidal transformer powering the analogue circuits and an IE core device supplying the digital components. The transformers occupy the middle third of the triptych-style internal layout, so optimising the distribution of weight in the player.

The audio stages are symmetrical and balanced throughout. Together with the power supply arrangements and features, such as an ultra- low-jitter clock, the unit strives to deliver music against a notably silent background.

Keeping extraneous noise and interference away from the audio doubtless influenced Yamaha's decision not to include any storage or optical devices in the NP-S2000, such as hard disks or CD/DVD drives.

Our listening test used a raft of LPs ripped to 24-bit/96kHz on a NAS, and, in this instance, a super-quiet background seems not quite as important as Yamaha imagines, not unless one is swayed more by the cosmetics of the presentation than by the music.

This is a highly capable player with a sound that is delicate and room-filling at the same time. It really impresses with straight ahead, live-in-the-studio jazz recordings, such as Art Pepper meets the Rhythm Section – a 24-bit/96kHz rip of the fantastic 1957 analogue session.

It digs in deeply to reveal a wealth of instrumental detail, nuances and resonances that vividly bring the music to life. And it positively revels in albums, such as the Richard Thompson's acoustic demo version of Dream Attic.

We found the NP-S2000 better suited to jazz and classical than the more contemporary likes of Eminem and Dr Dre. It still plays these with gusto and enthusiasm, but nonetheless sounds a little too polished and refined for some listeners' tastes with music that benefits from a few rougher edges.

Despite this 'politeness' it still articulates Eminem's vocals and demonstrates remarkable bass weight and punch. In fact, that LF heft also helps the player to create convincingly expansive sound stages with all types of music.

However, it saves its most convincing portrayals for the likes of the Kirov Orchestra performing Stravinsky's Firebird, where the player dexterously and convincingly balances conveying the delicacy of a triangle strike with the thunderous might of the percussion section and the blare of the massed horns in full flight.

Contrary to what we intimated earlier, the NP-S2000 manages splendidly when replaying high-resolution rips of well-cared-for vinyl albums. Despite the occasional bit of surface noise, which passes virtually unnoticed, the player focuses the listener's attention squarely on the music and the performances.

Its low noise floor exploits the dynamic range available and brings out an abundance of detail. It keeps this all firmly in perspective and does not allow it to dominate or interrupt the ebb and flow of the performance.

A collection of Graham Parker albums benefit particularly from their transfer to NAS by increasing the ease with which they can be auditioned, yet losing none of their musical integrity or vitality. The album Live! Alone in America is a special case here: the Yamaha allows the full artistry of Parker and his recording crew to come across in a entirely convincing and persuasive manner.

Listening to a favourite internet radio station, Radio Paradise, the NP-S2000 makes the most of the relatively limited amount of data available and produces a dynamic, well-articulated, full-bodied presentation that delivers the smooth, rich, enjoyable listening experience that we've come to appreciate over the last year or two.

Its performance on Radio 4 with live voices is also thoroughly satisfactory and very pleasing.

The NP-S2000 is a fine example of a network player from a 'big name' manufacturer. Its appearance is exemplary and its construction is superb. Its audio performance is fittingly premier league as well.

It performs well with all types of music, but it truly excels with classical, jazz and acoustic recordings. And, as with so many similar products today, the best way to control it is through an app for those ubiquitous iGadgets: the iPhone, iPod Touch or iPad, or through a web browser.