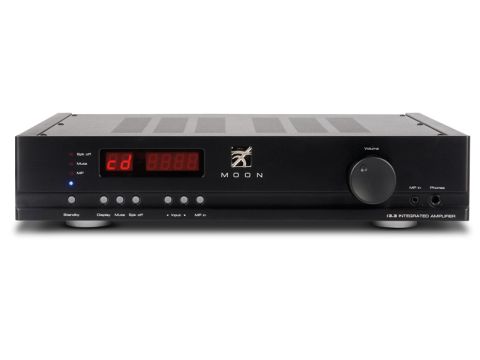 Generally good performance, though not outstanding in any one area

The Moon i3.3 is one of a growing number of integrated amps to include a digital input, either as standard or, as in this case, as an optional extra.

It makes a lot of sense: you don't need a huge amount of circuitry to make a pretty decent DAC and if you've got a case and power supply already it's quite a simple addition.

Electrical, optical and USB connections are provided, with the actual conversion being done by a good-quality, recent DAC chip supported by good passive components and onboard supply regulation. Sample rates up to 192kHz are supported (48kHz on USB).

The features are simple, with just four analogue inputs at the rear and one (mini-jack) at the front, next to the headphone socket. Output is rated at 100 watts per channel, the output current conveyed via two pairs of transistors marked with Moon's own part code.

The inside of the amp is quite busy, with circuits surrounding the mains transformer. Components are a mix of through-hole and surfacemount and also a mix of discrete transistors and integrated circuits. Input switching is electronic, but the volume control is a motorised potentiometer. Basically this is a fully traditional integrated amp plus digital input, but it is a very solidly built one and little touches like very high-quality output terminals add to the appeal.

Looking at our listeners' notes and also taking into account our sighted listening, we're drawn to the conclusion that this amp attempts to do everything. As a result, the i3.3 is a good all-rounder: its only problem is that it doesn't excel in any one area so risks being damned with faint praise.

It manages longer-term dynamics rather well, with nice swells over a period of a few seconds of more, but it can be a little underwhelming with sudden drum hits, unexpected piano chords and the like.

Conversely, it does very well with voices, which are natural and very communicative. Tonal balance is mostly good, though there can sometimes seem to be a little restriction of both frequency extremes.

In the treble it's really only the very highest frequencies that are affected, so most of the time one is not aware of anything amiss: it's only with exceptionally treble-rich instruments that one notices (a trumpet solo alerted one of our listeners, for instance).

Bass is a touch soft in the lowest octave or so, with a slight lack of extension and also of focus. Pace and rhythm work well, despite the dynamics limitations, with music moving along quite energetically and even urgently.

Stereo imaging is a little disconcerting, as it seems good in terms of extension in both dimensions, but lacks some precision in the placing of individual instruments. With large groups of players, though, the sense of specific bodies of instruments is impressive and adds beneficially to the overall effect.

One aspect that does slightly concern us about this amp is its lack of consistency. Usually there's some continuity of character between different pieces of music, but in this case our listeners ended up making some contrasting comments in different excerpts.

Nevertheless the general trend sense is of musical involvement.