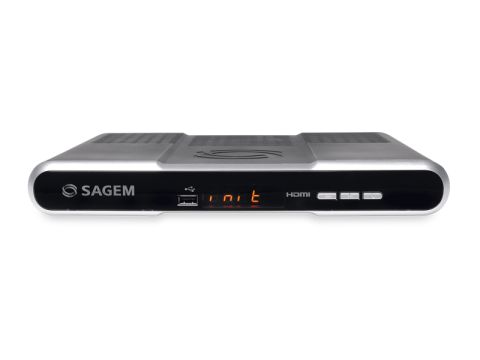 A competitively priced PVR with some attractive features to boot

French manufacturer Sagem seems to be taking on the big boys, with a PVR that challenges popular but higher-priced offerings from Topﬁeld (TF5810T) and Humax (9300T in particular).

With a 250GB (around 120 hours) disc, the 67250T is Freeview+ (née Playback) certiﬁed, with series link functionality and split programme recording supported out of the box. But there are no CI slots for pay-TV.

Sagem has done away with the rather bland modem-stylings of previous adapters in favour of a more conventional design. Roughly the size of the average DVD player (but heavier because of the hard disc), it's attractively curved at both ends but with a slightly Eighties feel.

Gone also is the garish red front-panel LED display in a favour of a more soothing amber tone. To the left of this sits a USB 2.0 port and on the right, up and down channel-zapping buttons and a power button.

The rear panel punches above its weight for a budget box, with a UHF loopthrough (though no modulator) and a caravan-friendly 12V power supply. An HDMI 1.1 output is joined by component out and two Scarts, the TV Scart being RGB and composite-capable; the Aux Scart offering RGB in and composite or S-video out. Add to these optical and co-axial digital and analogue stereo phono outputs.

The PVR doesn't run very hot, but it can be rather noisy on start-up. It consumes a fairly green 2W in standby.

The remote control is well organised and easy to grasp, making good use of coloured buttons and the PVR buttons as menu shortcuts. But the odd quirk creeps in: a button marked DVD, for example, brings up a menu for playing audio ﬁles.

It's disappointing to find that the main menu looks decidedly low-res on our new 37in Panasonic test TV, using icons as a jump-off point to more conventionally styled full-screen menus.

The seven-day EPG is populated by DVB data and can be toggled to show the selected channel running in the top-left corner of the screen. The default setting is a grid of TV and radio channels displayed with programme info that can be scrolled through, albeit rather sluggishly, especially while recording.

You can skip backwards and forwards 24 hours with synopses of your selected show viewable in the top right of the screen. An alternative view shows lists of programmes by time beneath the channels they are on.

You can pick which channels you want to see in the guide, set it to only show what's in your favourites lists (create up to seven) or to only show programmes of a chosen type. The programme information banner allows you to browse synopses and now-and-next info for any channels, but also to directly access and play back recorded shows from the library (a very clever feature).

You can schedule recordings by selecting a programme in the EPG and hitting record (with a buffer lasting up to 15 minutes either side). Series linking is supported, although the software could do with some better French-to-English translation. The manual timer has single, weekly, daily, Monday to Friday, Monday to Sat and Monday to Sunday options.

Recordings can be renamed, organised in folders, merged, and PIN-locked. A real bonus is the ability to export MPEG-2, MP3 and image files (up to 4GB) to and from external storage via USB.

HD can be upscaled to 576i, 576p, 720p, or 1080i but it does little to improve on the soft-looking pictures you'd get from the RGB Scart – a disappointment when viewing on larger-screen HD.

Audio remains crisp from both the digital audio outs and analogue phonos.