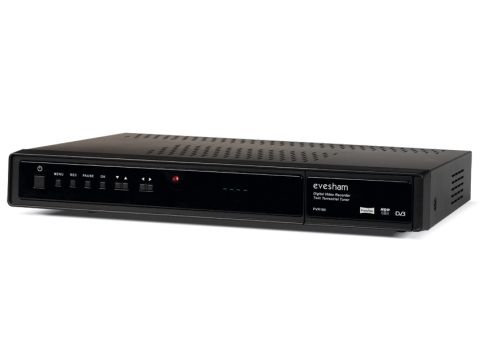 Small on price, big on features

Despite a lack of exciting features and unfashionable looks, this user-friendly PVR is still worth a punt

This PVR from Evesham is one of the cheapest on the market, but surprisingly, that price tag hasn't led to a big reduction in features - the hard-disk drive is a generous 160GB and there are two tuners on board.

The downside of the low price is that Evesham obviously couldn't afford to jazz up the unit's looks, resulting in one of the ugliest digital recorders we've ever seen, even if we can't really fault the build quality and size and we admit that the use of black styling is a refreshing antidote to the swarms of silver boxes on the market.

Connections are just about as comprehensive as you'll find on a PVR, with two Scart outputs (one offering RGB, the other S-video and composite) enabling you to simultaneously connect to a TV and DVD recorder. Two RGB-capable Scarts would have been better, but S-video should still offer good quality recordings on an external recorder. The roster is completed by optical digital audio output for piping audio to a receiver.

There's no CAM slot for adding pay TV, but with an ever-improving line-up of channels on Freeview, this may not be a crucial omission.

With two Freeview tuners on board you can watch one channel and record another, but it stops short of allowing you to record two channels at once. You can however, activate a useful picture-in-picture mode. The PVR160 doesn't really have many more tricks up its sleeve, other than a seven-day EPG and a Timeshift function that lets you pause live TV.

Up to 80hrs of programmes can be recorded on the hard disk, and they can be accessed at the touch of a button using the basic, but informative recording library.

After that there are search speeds of up to 32x and Favourite lists. It's a shame you can't actually edit recordings, but that's wishful thinking at this price.

The PVR160's menu system is slick and well presented, responding instantly to remote control commands. It's immaculately organised, and those with waning eyesight will appreciate the large, legible text inside the menu boxes.

Likewise the programme information banners, which allow you to browse now-and-next programme info without having to change channel. These are backed up by an easy-to-follow EPG, which makes good use of icons and colour coded keys, though it's not the most sophisticated around.

The remote's bargain basement looks and suspect build quality don't detract from its ease of use - all of the buttons are efficiently positioned, which makes it intuitive to use from day one.

We're mightily impressed with the PVR160's pictures, which are every bit as good as the more expensive models in this group test. Normal Freeview reception, for instance, is superb. Colours are bright and powerful, as demonstrated by the bold colours of BBC News 24's graphics and daytime TV studio sets all of which appear unsullied by MPEG noise, even when displayed on a 42in screen.

Recordings are identical to the source, edges are clean and well defi ned and there are few MPEG artefacts. The Evesham handles fast-moving action competently, with very little picture break up or noise around objects. Some tizzing is evident at the edges of text on the Sky Sports News' scrolling ticker, but it's hardly a deal breaker. Also impressive is the recorder's speedy display of digital text.

All in all, while this PVR lacks good looks and groundbreaking features, it does the basics well at a price that'll hardly make a dent in your bank balance.