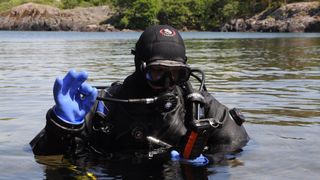 Deep below the surface of Europe's largest lake, Vänern in Sweden, Anders Brodin reaches for his diving computer. Thumbing carefully through its menus, he opens a Facebook client and composes a short message. He hits send. "Right now, I am diving at 16.1 meters and the temperature is 15 degrees. This is only the beginning..." pops up on the screens of his friends around the world.

This is something that divers have never been able to do before. More than a metre below the surface of a body of water, most radio communication fails. The water absorbs the signals of all but the lowest-frequency electromagnetic waves, meaning that a normal mobile phone, or even a walkie-talkie, simply wouldn't get any signal.

But divers still need to communicate, and that's why an extensive language of hand signals has been developed over the years. A thumbs up means "I'm going up", while a thumbs down means "I'm going down". A chopping motion at the throat means "I'm out of air", while tapping the top of the head means "I'm OK".

The obvious problem with this system is that it relies on divers looking at each other. A clenched fist thrust in the direction of danger (used to signify a hazard), is not much help if your dive buddy is distracted by an octopus. That's why recreational diving remains 40 to 60 times more dangerous than driving a car.

The device, called the Smart Console, uses four hydrophones (underwater microphones) to communicate with any other unit within 100 metres. Data is sent over ultrasound - the same method that most marine life uses to communicate. "If you could hear it, it would probably sound like one of those old modems from the Eighties," says Brodin, the company's co-founder and president.

The Smart Console, which has a 536MHz processor and a 3.7-inch AMOLED display encased within a simple waterproof exterior, displays the direction and distance of any divers within 100 metres. Users can send basic text messages to each other, and it even has a small app store where it's possible to download digital compasses, more advanced dive computers, and dictionaries of fish and dive sites.

There's even a version of the old Nokia classic, Snake - an idea that came from one of the testers. "He did a lot of long deep dives, and then To avoid getting diver's sickness, you have to go up very slowly and stay at six or three metres for a long time," Brodin says. "He was asking if we couldn't make a game for him, so he would have something to do while he was waiting."

Now, however, Aqwary is launching a new product - a buoy that can link up the underwater world with the surface. Using the same ultrasound technology as the dive computers, it taps into the subaquatic network and relays its information up to a boat. People on that boat can then send and receive messages from divers below.

That's how Brodin was able to send his Facebook message from below the waves. His dive computer converted the text into an ultrasonic signal, and beamed it through the water to the surface. There, the buoy read the data and forwarded it to a laptop on the boat, which in turn sent it over a 4G network to the Internet.

Facebook posts aren't the only thing that Aqwary's dive computers will be able to get from the web. While battery life requirements mean that bandwidth is limited to about 2kbps (way slower than 90s modem speeds), it'll still be possible to transmit weather warnings, task updates or even small amounts of data on undersea life.

"I don't think divers are as extreme as birdwatchers, but there are some that look out for specific types of fishes," says Brodin. "We actually played around with the idea of making a Pokemon Go application! It could probably be hacked together to some extent, but I'm not sure Pokemon has [an API] you can use."

To date, Aqwary's app store has been locked down from third-party developers (mainly as the device is classified as "personal protective equipment"). But that might change soon. "We actually do have a HTML5 interface that we're working on and eventually when it's stable enough we'll publish it for everyone to create their own apps," says Brodin.

Ultimately, though, Brodin doesn't want people sitting at the bottom of a lake reading Facebook. "You're only down for an hour - and most people dive less than an hour at a time," he says. "Most things can wait except stuff that's helping you enjoy your diving more when you're there."