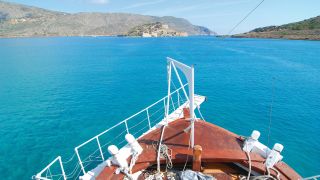 "That better not be Larry Page I can see"

Aloha, Oracle – His company may have failed in its bid to bleed Google dry in the courts over patent paternity, but this hasn't stopped Oracle boss Larry Ellison buying an island in Hawaii. The island, called Lanai, was used by Bill Gates for his wedding back in 1994, but we have no idea what Ellison is going to do with the thing. Rumour is, though, he was last spotted buying a white cat, some nuclear rods and sharks with fricking laser beams attached to their heads. [Telegraph]

App-solutely Fabulous – A new Facebook app from PhotoBox has arrived. Called Social Fab, the application allows you to add images from your Facebook profile on to t-shirts and mugs. Then you can take a picture of the said t-shirts and mugs and put them on to your Timeline thus creating a bizarre Inception-style world that will melt your mind. Or not. [Social Fab]

View on crime – Watching YouTube could become a criminal offence in Japan if a new bill gets passed. So will ripping your own CDs and intentionally downloading illegally uploaded materials. Bad times. [Kotaku]

Balls up – There have been a number of contentious refereeing decisions at the Euros this year, which has yet again ignited the debate on goal-line technology. Sepp Blatter has used Twitter to voice his concern, saying the technology is "no longer an alternative but a necessity". Which is nice – but maybe he should have listened way back in 2010 when Lampard's goal was disallowed. Not that we're bitter or anything… [T3]

Watch the drone – The next generation of anti-terrorism measures could well involve a swarm of drones that are the size of mosquitoes and will be programmed to spy on those pesky terrorists. Personally we think cutting holes in a newspaper will work just as well. And once you are done with it, you can roll it up to swat said drones if they get too close. [RT.com]

Class in a glass – Forget Instagram, the future is Instaglasses – glasses that have a built in nostalgia filter for those who want to look at life through, er, rose-tinted specs. It's a concept at the moment but once those crazy hipsters get hold of the idea they will surely soon become reality. [Behance]

Netflix looks to the Sky – Netflix has decided that it will be outbidding Sky for movies in just a year from now. We are sure Netflix has a gameplan and has not just plucked this arbitrary date out of the Sky but we can't really see it happening – well, not in the UK anyway. [Paid Content]

Monster madness – Footage from the prequel to Monsters, Inc has finally been release in not one but four new trailers. Actually, it is one trailer but with a subtle dialogue change. The reason: well it's all about being social and on Facebook, as you can head over to the social network and vote for your favourite. [Facebook]

All Wight on the night – An app has been released for this weekend's Isle Of Wight festival containing on-stage times of all the bands, a map and other such niceties. It's available on both iOS and Android.