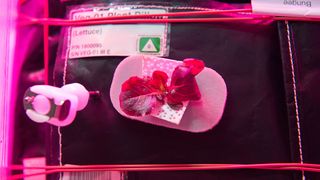 Astronauts aboard the International Space Station are officially the first humans in history to ever eat space-grown lettuce.

Japanese astronaut Kimiya Yui, NASA's Kjell Lindgren and Scott Kelly of the Expedition 44 crew nibbled on red sprigs of romaine lettuce making this the first time anyone has eaten food cultivated in space.

While dining on the space grown Salad, Astronaut Kelly noted it tasted good and a bit like arugula. Of course, test tasting space crops was just the first step. The Expedition 44 crew members also froze half of the lettuce harvest, which the team will send back to Earth for scientific analysis.

While it might sound strange for lettuce to taste anything like lettuce, these leafy greens were grown in a very different environment than here on Earth. For one thing, the lettuce developed an deep red color due to being primarily grown in an environment lit by red and blue LEDs.

Also thanks to the weightlessness of space, the lettuce didn't not grow in a traditional plot of soil. Instead, NASA seeded a rooting "pillow," which contains the necessary nutrients and dirt for the plants to take root and fully grow in 33 days.

In this particular experiment, the astronauts harvested the plants that began growing on July 8. Earlier last year, NASA also conducted an experiment that began in October, after which the plants where harvested and sent to Earth for food safety analysis.

On top of giving astronauts something more nutritious to eat than frozen, dehydrated food, space grown crops could be instrumental in long-term space travel. Not only do plants provide food, they're also a natural air recycler and could provide some much needed recreational activity to help keep the astronauts busy (and sane).