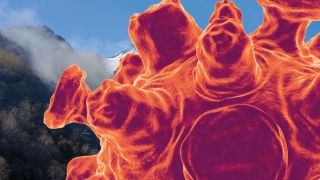 WiS - we photoshop so you don't have to

This Week in Science promises to be yet another corker. From nuclear bomb blasts unveiling the hidden workings of our brains, to the prospect of volcanoes producing bountiful clean energy to power our world, it's all been rocking.

But, arguably the biggest news from the past month has been the amazing results shown in a number of small clinical trials by three separate anti-cancer drugs, all working using antibodies to unmask the deadly tumour cells, allowing your own immune system to get to work and kill the buggers off. Amazing stuff.

Results presented at the recent annual meeting of the American Society of Clinical Oncology show three antibody-based drugs that can block the activation of this PD-1 override switch, allowing T-cells to correctly identify cancerous cells and target them for destruction. All three drugs showed impressive efficacy against both skin cancer and other cancers in small clinical trials, with some patients being entirely rid of their deadly advanced melanoma in record time, and are now entering much larger trials combating other forms of cancer.

While we can't quite count our chickens just yet, the results so far are extremely encouraging. By using your own immune system to combat cancer, this technique promises to be efficient at eradicating tumours with minimal side effects, nuking cancer with our own natural weaponry. [New Scientist]

Nuclear bomb reveals brain secret -- Thanks to a series of nuclear bomb tests, we've finally be able to categorically answer one of the biggest questions concerning the human brain: Do we generate new brain cells throughout our lives?

Using a radioactive isotope, carbon-14, expelled into the environment by the nuclear tests, a recent study has proven that humans do in fact continue to grow new brain cells in certain neural regions. Carbon-14 levels in the atmosphere were dramatically increased between 1945 and 1963 by above ground nuclear tests. By measuring the amount of C-14 locked within DNA in cells in the human body, it's possible to decipher when they were born matching known atmospheric levels at the time.

The researchers discovered that a small population of brain cells in the hippocampus, called the denate gyrus, creates about 700 new neurons every day, showing that neurogenesis continues well after we're children. The denate gyrus is thought to be involved in the formation of episodic memory, which indicates new cells could be important in the formation of memories, something that is known to be true in mice but that hasn't yet been proven in humans. [Cell]

Science is to atheists, what faith is to the religious -- For people of faith, turning to God or their beliefs is often found to be a coping mechanism for periods of stress or anxiety. Now it seems atheists have a very similar method for dealing with abnormal situations, except they turn to science rather than God.

A study of rowers in Oxford showed that in periods of stress, such as right before a big race, the non-religious among them rated their belief in science an average of 15 per cent higher than at other times. This small study reinforces a growing body of work that suggests people move closer to specific aspects of their worldview, be it political, religious or rationality, during times of stress. It seems a belief in rational thinking and science has replaced a belief in religion for those of the non-religious persuasion, showing that everyone has to have something to believe in, even if it's not pure faith. [JESP]