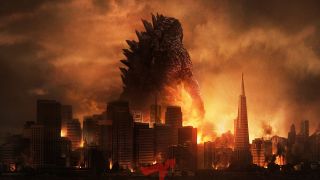 Gareth Edwards on the making of a monster

When making a Godzilla movie, the conclusion you are going to come to pretty quickly is that size matters. For director Gareth Edwards there was only one way he wanted to go with the size of his Godzilla and that was upwards.

"We wanted to make Godzilla as big as you possibly can - he's actually technically 350 feet in the film," said Edwards at a recent world's first showing of Godzilla footage in London.

"The way we arrived at that was quite simple, we wanted him tall enough to see him in a city but small enough so he can be obscured some times. Otherwise there is no fun.

"We went through all the permutations and it was quite clear for us that the 350 foot mark worked. And especially because that makes him technically the biggest Godzilla ever - so we were like, let's do that!"

Dealing with size is something Edwards has been doing for the past three years now.

With only one other film under his belt as a director, he has had to learn very quickly about the economies of scale that come with big-budget moviemaking.

His first film Monsters was a superb low-budget alien invasion movie. It was made for £500,000 which is peanuts in movie money and all the effects were created by Edwards on his home computer.

Although it was special effects laden Monsters' focus was very much on the characters. But when the aliens were shown, they looked far bigger and better than the budget should have allowed - thanks to Edwards' previous job as a visual effects supervisor.

At the time of release, Edwards explained to film critic Mark Kermode his thoughts behind Monsters' effects.

"The whole point of CGI is realism," he said. "That is why you spend all that time, the pain of doing creatures and lighting. So why would you go to all that trouble on CGI and not spend the rest of time going to the same trouble for the movie?"

The changes in computer effects software in the home allowed Edwards to create his monsters from his own mass bundle of sketches. Using Adobe's After Effects, he could create more organic-looking creatures from what was essentially digital clay. He abused the software as much as he could, taking particles from myriad plug-ins to make his monsters work.

Skip to 2014 and he now he has a budget of $150 million to work with, and the small task of creating perhaps the world's most well-known and well-loved creature.

You would think with 28 films from the legendary Toho Studios - and one frankly embarrassing Roland Emmerich remake - coming up with the look of Godzilla would be easy but Edwards admitted it was a challenge.

"I thought it was going to be a really simple task to design Godzilla. He is already designed, you just copy him right? But it became a process that took over a year trying to get the look right," said Edwards.

"It is like when you witness a crime and the police ask 'what did it look like' and you go 'well he had this thing...' and they ask you to draw it but you just can't. It was a lot of trial and error.

"Weta did the design for a lot of Godzilla and it was this constant back and fourth thing until we got to a point where we could rotate him from every angle and get a proper look at him and feel like we didn't want to change him.

"In the end we are really proud of the way that he turned out."

With British VFX giants MPC (Moving Picture Company) and Double Negative also handling the visual effects for Godzilla, the whole thing is a far cry from Edwards in his bedroom sweating over After Effects. But sometimes bigger isn't necessarily better when it comes to the creative process.

"You can very easily get seduced by CGI. My background is visual effects but I think the honeymoon period is truly over for me and visual effects," he says.

"With Godzilla it is as much about the story and creating characters that you genuinely care about."

Story, Edwards notes, is the hardest thing to get right regardless of your budget.

"The real difficulty in any filmmaking process is to try and tell a gripping story that you really care about and that doesn't matter if you have got 10p or 300 million. It is just as hard for anybody and that is what we focused a lot of our time on to get right."

Current page: Godz and Monsters: the look of Godzilla