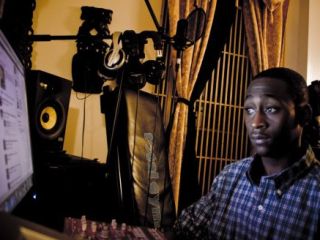 If you're feeling a bit bad about the way you cackled with joy as you merrily slaughtered so many innocent civilians in THAT level of Modern Warfare 2 this week, here's a great way to make up for your evil thoughts - Bible Navigator X.

The clue is indeed in the name. It's a bible for the Xbox 360. You don't play it. It's not Bible Hero or Halo: Bible, but the proper, written, verbose actual Bible, presented in searchable text form for gamers to read thoughtfully after aggressively swearing at some poor children online.

"This application will bring the Bible into people's living rooms and onto their televisions in a completely new and innovative way," says Aaron Linne, of producer B&H Publishing Group, the company that somehow convinced itself this sort of thing might be what Xbox 360 owners want.

EARLY QUITTERS BEGONE: Download unto your hard drive and repent.

The "game" will appear via the Indie Games tab of Xbox Live for 400 MS Points this December. We will not be available for multiplayer.

Modern technology helped get Gareth Powell out of a spot of trouble this week. The van driving gentleman was clocked by police outside Bristol doing 61mph in a 50mph zone, a vehicular administrative error Gareth denied, saying he was actually an "extremely careful driver" and had in fact been proceeding within the limit.

But you can't argue with the police, can you? Actually, you can - if you have a GPS tracking system that precisely records your every move.

The GPS tool in Gareth's van backed up the unbelievable claim that a van driver might be careful, with supplier Navman's IT director turning up at the court to verify the data and prove Powell was only doing 48mph. A small moral victory for the everyday man, and a large publicity victory for Navman Wireless.

"Not me, I was Twittering from the toilet"

In other bizarre jail-avoiding tech news, Rodney Bradford happened to update his Facebook status with a tedious message to do with pancakes from his father's computer at 11:49am on October 17. His timing was crucial, as the cops picked him up the next day and charged him with a robbery that took place at the same time.

His legal people managed to get Rodney off the hook, after contacting Facebook and confirming his status was indeed changed at the time recorded and from his dad's location. So unless we've all been conned by a clever tech-aware, father/son robbery team, poor little Rodney was saved from several months of prison brutality by Facebook.

The Sh** People Put on TV

Weird Tech wouldn't be anything like its soul-destroying, depressing self without the usual bout of head-shaking at the latest ludicrous Twitter developments, so here's a miserable note to end on - oddly popular Twitter feed Shit My Dad Says is being made into a TV show.

A MAN PRETENDS HIS DAD SAYS: It's made up, right? Reads like knowing "American humor" to us.

The Twitter feed charts the supposedly true and supposedly amusing rants of an angry, possibly senile, 73-year-old man, although everything seems just a little bit too funny and a little bit too well observed to be genuine, if you ask us. The Times says US network CBS is getting the creators of idiotic camp screaming festival Will & Grace on-board to produce it. We hope we leave you suitably depressed.