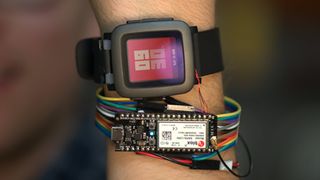 Pebble is going big on its smartstrap idea, to the tune of $1 million. That's how much the company has pledged towards development of the accessories for its latest Pebble Time and Pebble Time Steel smartwatches.

And what are these smartstraps, you ask? They're essentially an open platform for developers to play around with: you could build a strap that extends the Pebble's battery life, for example, or adds GPS-tracking capabilities.

The idea is that third-party developers and Pebble itself can add functions and features that couldn't fit into the smartwatch for whatever reason. Heart rate monitors, NFC chips and more could all be added via the strap instead.

Putting the funding in crowdfunding

Pebble's pledge will "encourage the development and commercialisation of smartstrap projects for Pebble devices" says the company, promising to financially back the best smartstrap ideas that appear on crowdfunding platforms such as Kickstarter.

"If you have an idea and want to be part of the smartstrap revolution, this is your chance!" says Pebble. "Get a team together, build a prototype and put your project up on a crowdfunding platform. Our team will work to help bring your idea to life."

Pebble's announcement also mentioned two early smartstrap ideas: a modular smartstrap system from Seeed Studio that lets you swap various components in and out, and an Electron device from Spark.io enabling you to connect a Pebble directly to a cellular network.

Our thoughts so far on the colourful Pebble Time