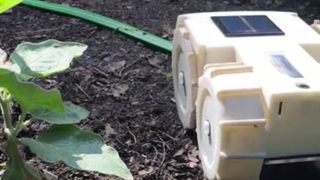 A new garden-friendly gadget has been designed that promises to do for our lawns what robot-vacs did for our carpets.

For those of us with gardens, the perpetual struggle against unstoppable Mother Nature and her weed ground troops is one of our, admittedly first world, annoyances, but a solution could be close.

We don’t often cover prototype projects, but the Tertill has a working solar-powered version and is from the imagination of Roomba co-creator Joe Jones - CTO of Franklin Robotics - so it’s not just stuck in the, ahem, weeds.

But before you get too excited, you’ll have to make sure there’s Turtill-sized spaces between your plants to allow the weeding bot entry, and you'll need to be clear of foxholes with a nice clear garden boundary.

"The idea for Tertill came about as a way for gardeners like me, as well as more experienced gardeners to grow a healthy garden without worrying about weeds,” explained Jones in a blog.

“Better gardeners might have known to be more attentive to the weeds than I was. But even those more experienced gardeners go away on vacation (and usually in the months that weeds grow the fastest).”

We’re aware that every idea has to start somewhere, so regardless of its current status we’re excited about the principle.

If it can be programmed to sing 'Daisy, Daisy' as it goes about its business then we’ll be even more impressed.