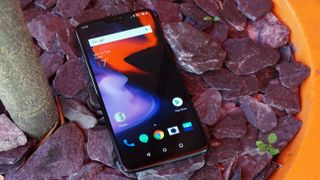 We’re just days away from the October 29 launch of the OnePlus 6T but one retailer seemingly couldn’t wait, as the phone has already appeared on its site complete with new images and a complete specs list.

The retailer in question is Otto (a German store) and while the listing seems to have been removed, WinFuture and a blogger known as Caschy were able to grab all the details first.

You can see the new photos below and they match up with what we’ve seen before, showing a teardrop notch and a tiny bezel below the screen, while on the fairly plain back there’s a dual-lens camera.

The rear camera supposedly consists of both a 16MP f/2.0 lens and a 20MP f/2.0 one, though there are no details on what each lens is used for. Then on the front there’s said to be a 16MP single-lens camera.

A big battery and a higher price

There’s also apparently a 3,700mAh battery and a microSD card slot, with the OnePlus 6T said to come in Midnight Black and Mirror Black shades, and sport dimensions of 157.5 x 74.8 x 8.2mm and a weight of 185g.

This all broadly lines up with what we’ve heard before, so there’s a good chance that it’s more or less accurate, but as ever we’d take it with a pinch of salt.