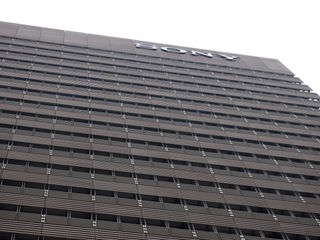 Sony is famous for a lot of things.

Most recently it's been the launch of the PS Vita and some disappointing financial results that have been getting the headlines.

But one thing Sony hasn't had much coverage over is its work to reduce its impact on the environment.

Of course, any manufacturer of oil-based plastic products creates a sizeable carbon footprint but Sony has become a shining example to other electronics manufacturers by committing to completely eliminate its negative effect on the environment by 2050.

The road to zero

It's the very first building of its kind to use a natural 'bioskin' cooling system, and TechRadar was lucky enough to be invited to visit earlier today.

The bioskin is made up of a network of porous ceramic pipes that are made using soil. Rain water is collected from the roof of the building throughout the year and during the hot Japanese summer, the water is pumped back up through the pipes on the outside of the building.

The water penetrates the ceramic and evaporates from the pipe surface, which cools the surrounding air by around 2 degrees. This shields the building from the sun's intense heat and reduces the load on the CO2-producing air conditioning systems inside the building.

It's the kind of cutting-edge green-thinking that Sony is applying to many of its consumer electronics projects.

TVs made from old DVDs

Sony has also recently developed a new material for its products which is made from 99% recycled plastic. The material is called SoRPlas and is made from recycling old products.

Discarded DVDs are blended up and the metal film from their surface is peeled away. The optical sheets from discarded LCD TVs are also shredded and the resultant shrapnel is blended with the DVD fragments. The strength and stiffness of the recycled plastic can be manipulated according to the proportions of the mix.

This mix is then added to some dye and a very small amount of flame-retardant to make the plastic fireproof, and the resulting material is a plastic that's every bit as good as more 'fresh' plastic.

Using this method, Sony is now able to build products like earphones and its packaging from 100% recycled plastic. It's also now being used to build the bezels of some of Sony's TVs, while 80% of the plastic used in the HDRTD20V 3D camcorder is made from this SoRPlas material already.

Using this material means 77.3% less CO2 is produced compared to conventional plastic, and the aim is to use SoRPlas to replace as much plastic as possible across all of Sony's many factories.

The first step in Sony's 'road to zero' is to harness the environmental benefits of SorPLas to reduce the company's resource consumption by 30 per cent and its CO2 emissions 20% by 2015.

But the goal extends beyond manufacturing. Sony's ultimate aim is to include product life cycles into the zero-emissions plan, which means building energy efficient, environmentally friendly products and packaging.

Sony has already ceased production of old-style LCD TVs, with 100 per cent focus on more efficient LED tech. This also means sets can be thinner, using less materials - and has the further effect of requiring smaller boxes.

The bio batteries are also very interesting - they feed renewable glucose and oxygen to natural enzymes to generate electricity. This tech is a way off being used in your everyday smartphone, but it's being developed and looked at very optimistically.

While the zero emissions goal is still very far away, it's initiatives and innovations like these that will make future generations wonder what kind of barbaric tree-hating gas guzzlers we really were.