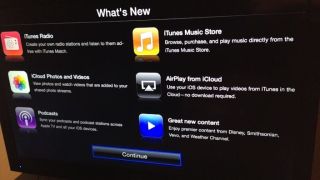 A significant Apple TV update hit the airwaves today, bringing with it a host of features Apple device users are already enjoying with iOS 7.

AirPlay from iCloud will let folks play content purchased from iTunes on any Apple TV, so you're not stuck to only stream paid-for content from the lonely confines of your living room.

For the unfamiliar, iTunes Radio is Apple's new streaming music service, available in both ad-sponsored and commercial-free flavors.

The update didn't come on Sept. 18 as was previously reported, the day iOS 7 officially launched, but never mind that. Apple TV 6.0 puts a bow on a week that saw an avalanche of new software and hardware from Apple.

The update has been in beta since June, but now the bona fide finished hardware is making it out to Apple TV tuners.

While it wasn't clear (until the day of, of course) whether Apple TV would get some attention during the Sept. 10 reveal of the iPhone 5S and iPhone 5C, industry observers are placing bets that Apple will introduce new TV hardware sometime this year.

The likely timing would be during the company's rumored October iPad 5/iPad mini 2 event, though nothing is official.