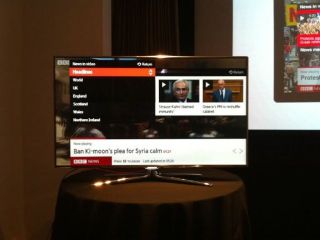 The BBC has announced that it is to launch a BBC News app for connected televisions, with Samsung being among the first partners for the app.

In a conference today, with TechRadar in attendance, the BBC launched the app saying that it will "provide 20 to 25 minutes of footage to get the user up to date, and should provide the same info as watching a bulletin on BBC One."

Samsung has been going all out with its app service for televisions, with its Smart Hub available on a variety of Samsung TVs - including the company's flagship model, the D8000 Series.

The Samsung Smart Hub already has apps for the BBC iPlayer and LoveFilm and the addition of BBC News is a big win for the company.

Samsung also recently launched a 3D VOD service through its Smart Hub. This offers a variety of 3D content, from movies to trailers and is the first 3D on-demand service of its type in the UK.

"Today we are launching a fourth screen for news," said the BBC's Ralph Rivera.

"The initial launch is with Samsung Smart TV's but this is designed to be scaled to any manufacturers who meet our syndication and technical requirements.

"This is built with HTML, and it is a web-delivered experience that could run on any device that supports this spec."

Samsung has also announced that it has now shipped 2 million Smart TV sets, including 710,000 across the European region.