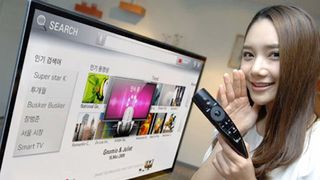 LG is banking that big bendy screens will be the future of home entertainment and it has the Korean government's backing.

According to DDaily, a Korean website, LG has been given a cool $55 million to develop its screen technology – a deal that it won over its rival Samsung.

The cash injection means that LG is busy creating Ultra HD 3840 x 2160 flexible screens in a number of sizes – with the biggest being 60-inches.

When it comes to flexibility, they will apparently have a 10cm radius of curvature.

LG has already dabbled in flexible displays – most of these were concepts and created when LG and Philips were best buddies back in 2007 – so it does make sense that the company would want to go big on the technology.

Given it is still prepping the release of its 55-inch OLED TVs, though, it's unlikely we will see this technology come to market anytime soon.