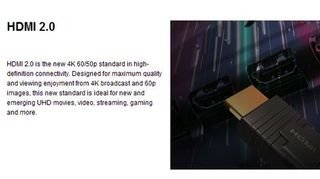 IFA 2013 is about to kick into high gear, but we may have a pretty significant tidbit from Panasonic a day before its scheduled press event.

According to a post at AV Forums, Panasonic will chat up its new Ultra HD WT600 LED TV, dishing on its 4K capabilities.

While that's none too shocking given the TV biz's surging obsession with 4K sets, Panasonic's offering will reportedly roll out the welcome mat for HDMI 2.0.

If a blurb seemingly pulled from Panasonic's site proves true, HDMI 2.0 would mark a huge leap forward in 4K television readiness as it would allow content to play at higher frame rates while still supporting the super-res of 4K Ultra HD.

As AV Forums tells it, Panasonic's HDMI 2.0 will hit 60 frames per second, though the WT600 was listed as supporting 50 fps before its web page was taken down.

As it stands, HDMI 1.4 can only hit a max of 30 frames per second at a resolution of 3840 x 2160. Watching a rom-com at this standard would be fine, but when it comes to sporting events, movies starring The Rock or any other high-speed action on a 4K set, HDMI 1.4 is far from adequate.

Panasonic's press conference is scheduled for 2 p.m. BT/6 a.m. PT Wednesday, and we could very well see HDMI 2.0 hit the air waves then.

"Next Steps in HD Connectivity" sounds a little bland, but it stands to reason that we could hear more about HDMI 2.0 at this event following Panasonic's WT600 reveal.

The WT600 doesn't look like the sexiest beast around, but it will apparently have a 65-inch screen, a 4K media player, 4K fine remaster engine, 4K web browser and 4K online playback. There's no word yet on pricing or specific availability, but the WT600 is said to come with THX 4K certification as well.