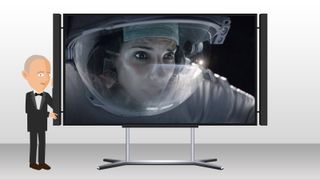 An HDR-graded version of Gravity is ready for release

The next big thing in Ultra HD will be HDR (High Dynamic Range) imaging. 4K may well offer up the picture detail that filmmakers finally agree is a decent representation of their movies, but if you really want to impress a cinematographer then you have to hit them with a much more appetising colour palette.

This is what HDR offers and, according to the chatter at broadcast trade show NAB, it's the key ingredient to making 4K work in the home. Essentially, if the general public aren't that picky about pixels, HDR's vibrant colour reproduction will get them to part with their cash.

There is a problem, though: currently there's no HDR specification. TV shows and movies are currently downgraded in order to comply with existing broadcast and display standards and a host of companies are jostling to make their tech the soon-to-be industry standard for HDR.

Dolby has been demonstrating Dolby Vision, a transmission format that offers 40 times the brightness of a conventional TV display, while Technicolor wants to get its HDR wizardry assimilated into HEVC, the codec of choice when it comes to managing and distributing 4K content.

8 million pixel definition is all well and good then, but it seems that the possibility of preserving contrast and colour as it was originally lensed is really getting content makers excited. TV manufacturers are already flitting around the edges of HDR and seem well primed to jump when the light goes (intensely) green.

At CES, Samsung previewed an ultra high contrast 4K TV behind closed doors. That display was capable of 1,000 nits of brightness. Wider colour gamut LED displays of various flavours are already in circulation, such as Sony's Triluminos sets, while OLED seems a natural HDR display technology.

Speaking at the NAB Technology Summit on Cinema, cinematographer Emmanuel Lubezki revealed that there was already an HDR colour-graded version of Gravity ready to be released. Howard Lukk, standards director from the Society of Motion Picture and Television Engineers, went on to tell trade bible Variety: "There's a feeling in Hollywood in order to change over the complete marketplace to a new format, we really need more than just more pixels."

Dramatic improvements in contrast and colour could be what's needed to persuade people to upgrade their TVs, he suggests.

Past the pixel count

Hollywood is understandably blasé about the benefits of a quad HD pixel count. It's used to playing fast and loose with image resolution. When films can be shot on anything from 35mm to 5K Red Epics, and then have all their post production visual effects rendered at 2K, it's not surprising that the numbers don't really add up.

The truth is that most movies are created from a soup of resolutions. Studios will simply tout a film as 4K based on whether the DCP (Digital Cinema Package) supplied to theatres is tagged 4K rather than 2K. HDR is not only visually jaw-dropping, it also covers up a host of sins.

Framestore's Christian Manz, the VFX Supervisor on Keanu reeves Samurai fantasy 47 Ronin, told TechRadar that the sheer cost of 4K visual effects was dampening Hollywood's enthusiasm for extra pixels. "At the moment it all comes down to data management and render time. It's money basically," he says.

Manz adds though that Framestore is now doing "a lot more commercials with 4K finishing" for the advertising industry, "we're driven by what our clients want."

Ultimately, he says, a wider 4K upgrade for movies will be driven by the film makers themselves. "The Christopher Nolans and Alfonso Cuarós of this world will always want to push the envelope with technology," he notes. Manz goes on to reveal that 47 Ronin was shot 1920 HD. "Camera technology was evolving even during our shoot. By the end of filming we could have shot 3K to disc," he says.

Get on the pace

While Ultra HD and HDR seem natural bedfellows, the other elephant-sized acronym in the room is HFR (High Frame Rate). Once again, creatives rate a higher fps as a bigger draw than resolution - and the 48FPS which so divided audiences of Peter Jackson's The Hobbit was only the start.

Wilfred Van Baelen heads up Auro Technologies, developer of the Auro-3D sound system, and runs the Belgium-based Galaxy film studio. He's in no doubt that the future of entertainment is 60fps or higher.

"When you watch high frame rate content, you naturally feel much closer to the subject," he told TechRadar. "When a human brain is monitored during a movie screened at 24fps, there's extensive brain activity caused by the need to interpolate the missing frames," he says. 'However when you see the same movie viewed at a higher frame rate, brain activity calms down. You become more relaxed."

Peter Jackson's The Hobbit in HFR 48fps may be technically better than 24fps, he argues, "but if you add just 12 frames more it becomes amazing. Other parameters are important, such as high dynamic range and improved colour gamut, but from an immersive point of view I think the frame rate is more important than resolution."

It seems that when it comes to Ultra HD, we're barely up to speed.

Why Netflix in Ultra HD will ruin TV
Netflix has ruined television forever. Speaking as an unashamed hi-def snob who'd rather miss out on a show than have to watch it in grotty standard def, I've been champing at the bit to devour native 4K. Unfortunately, having now been one of the first to watch Ultra HD streamed live from Netflix servers, my beloved Full HD just doesn't look that great any more.