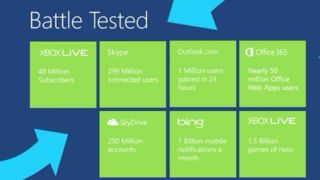 Microsoft laid out its latest subscriber numbers and server statistics at Build 2013, updating the figures for its Azure-powered online services like Xbox Live, Skype and Office 365.

Microsoft also reminded everyone at Build that Outlook.com was able to gain 1 million users in its first 24 hours of availability and Office 365 now has nearly 50 million Office web app users.

All not quiet on the gaming front

Microsoft reiterated the stat of having 600 times as many servers for Xbox Live as it did when its online gaming service started.

It touted the previously announced total of 300,000 servers ahead of the Xbox One launch for Xbox Live's updated 48 million subscribers.

"[Microsoft] had around 500 servers. Now they use something like 300,000 servers, which are all part of our public cloud to be able to really drive their experiences."

The growing number of Xbox Live servers have been tasked with plenty of Halo gameplay, according to Nadella.

"Halo itself has had over a billion games played and something like 270 million hours of gameplay. And Halo uses the cloud in very interesting ways."

He rattled off a list of off-loaded resources: pre-production, rendering support and assist, gameplay and post-production analytics.

Nadella was clearly driving at the fact that Xbox One developers will be able to off-load resources to Microsoft's Xbox Live servers, which could make up for its slightly inferior specs when compared to PS4.