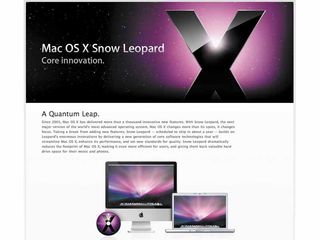 Head over to www.apple.com/macosx/snowleopard for more on Apple's new OS

What an incredible launch. Packed with over 300 new features, Apple's OS X 10.5 Leopard sold more than two million copies in its first weekend on sale.

Steve Jobs was bullish. "Leopard's innovative features are getting great reviews and making more people than ever think about switching to the Mac," he said.

But the undoubted success of Leopard caused a problem of its own. How do you top it?

With OS X 10.5 so well received, how can you go one better with 10.6? The solution is as simple as it is surprising. You don't try…

The next big cat

At the Worldwide Developers Conference in June 2008, Jobs announced the follow-up to Leopard. Dubbed OS X 10.6 Snow Leopard, the new operating system, which is expected in the second half of 2009, offers improved speed and performance rather than adding anything new.

"We've delivered more than a thousand new features to OS X in just seven years, and Snow Leopard lays the foundation for thousands more," explained Bertrand Serlet, Apple's Senior Vice President of Software Engineering. "In our continued effort to deliver the best user experience, we hit the pause button on new features to focus on perfecting the world's most advanced operating system."

Despite the odd gripe, reaction to this move has been overwhelmingly positive. Daniel Jalkut, owner of Red Sweater Software and a former Apple engineer, says "I think it's a great idea to focus on stability over features, and doing so is probably indicative of Apple's feeling that it has reached a comfortable point in the development of OS X.

For the first few years, the OS was in many ways catching up with what Mac OS 9 offered users." Kevin Ford of Mac telephony specialist Parliant agrees. "I don't feel wanting for anything in the existing OS. I'm happy to have no new features if it means better stability."

So what does that mean in real-world terms? In a nutshell, what will Snow Leopard do for Mac users? Inevitably, Apple isn't telling. "We don't comment on future products," insists Apple Europe's Director of Corporate Communications Alan Hely.

Yet equally inevitably, with leaks from Apple insiders, comments from developers who have seen early versions and deductions from astute Apple watchers, we can gain an interesting insight into what we can expect next summer. So, let's take an early look at Snow Leopard.

Early reports say installation times are drastically improved. According to Mac review site TestMac.net, "Right off the bat, [Snow Leopard is] fast. Very fast. A clean installation took about 13 minutes from start to finish, which is a world of difference from the hour or so a clean 10.5 Leopard install takes."

This is, to a large extent, due to a significant reduction in the size of the operating system and its core applications. In short, Snow Leopard boasts a much smaller footprint than its predecessor. The figures speak for themselves.

Mail is down to 91MB in size, whereas before it was 287MB. QuickTime is now 8MB instead of 29MB, TextEdit has been reduced from 22MB to 2MB and the Mac OS X Utility folder has dropped from 468MB to 111.6MB. Similar size reductions are reported in other OS X applications too.

Given the reduction in the operating system's overall footprint, you won't be surprised to hear it enjoys a massive boost in speed. The word from Mac developers who received preview copies at the Worldwide Developers Conference last June is that Snow Leopard looks and feels very much like Leopard, but is noticeably speedier. It boots quicker, opens applications faster and runs more smoothly.