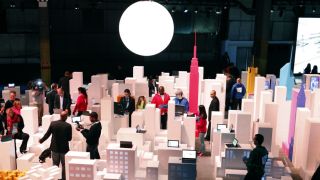 From launching Windows 8 to losing the head of Windows, this year has been a rollercoaster for Microsoft

You couldn't ignore Microsoft this year; a veritable flood of announcements and launches kept the company in the news.

Ballmer called 2012 "the most epic year in Microsoft's history", and we haven't seen Redmond be this feisty for quite some time.

But it wasn't all good news; there were delays, complaints and unwelcome surprises too. Here's our pick of Microsoft's hits and misses this year.

Key was the 16 million downloads of the preview releases, and though the 40 million licences sold in the first month sounds more like PR bluster, we're calling Windows 8 a success.

Despite continuing arguments over changing the Start menu to the Start screen, we think Windows 8 is a solid improvement that gives Microsoft a solid start in the tablet market, as well as adding more performance, security and battery life to PCs running familiar desktop applications, and a new version of IE that does well in every benchmark that's not designed to showcase WebKit.

Between Windows 8, Windows Phone 8, Xbox, Office 2013, Skype and redesigns for Bing and MSN, Microsoft has its new look everywhere.

From a secret launch that had the internet buzzing, and the snap-on, click-in, super-thin Touch Cover, to literally days of battery life and a beautiful, glare-free screen that's strong enough to use as a skateboard and survive being run over at 60mph, Microsoft's first real tablet is new, different and striking.

Microsoft is increasing production on the original Surface and the Intel-based Surface Pro is on target for January. Questions do remain over sales figures though, but more on that later...

Without knowing how many it sold last year, we can't tell if Microsoft selling four times as many Windows Phones with Windows Phone 8 is impressive or disappointing; but 40% increases in Facebook usage on Windows Phone and in submissions to the Windows Phone marketplace, and the Lumia 920 selling out almost everywhere it's on sale, argue for impressive.

Skype integration and seamless, elegant and definitely-different interface, plus great hardware options like wireless charging and Nokia's excellent low-light camera give the iOS and Samsung champions some real competition.

It might be seven years old (and we're still hoping for a new model next year), but the Xbox 360 is still outselling the competition.

Add in 40 million Xbox LIVE members, over $220M in sales in just the first 24 hours that Halo 4 was available, and 62 streaming TV and movie services on Xbox LIVE , and Xbox is undeniably successful.

Free streaming in Windows 8 (even with some adverts that haven't shown up yet) and Smart DJ playlists in Xbox Music (on Windows 8 and Xbox) give Spotify some serious competition.

Using SmartGlass on Windows, iOS and Android devices to control your Xbox without ever picking up a controller is a really impressive experience (far more so than the hit-and-miss Windows 8 Play To features).

Add in Internet Explorer, SkyDrive and voice control on Xbox, and those Xbox sales numbers are clearly about more than just gaming.

Apple is still talking about tackling the TV and home entertainment market; Microsoft might have already done it.

Hotmail has an image problem, with long-solved spam problems still haunting the service.

Not so Outlook.com, which has picked up over 25 million active users in just four months (and garnered plenty of praise for its clean Windows 8-style look, as well as for email management features that languished ignored in Hotmail).