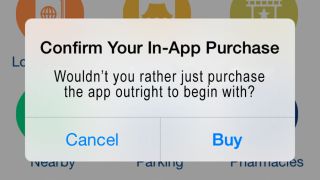 It may have felt like the entire world was trying to download iOS 7 all at once Sept. 18, but that pales in comparison to the number of mobile apps users will download over the next year or two.

If that news isn't depressing enough for gamers who prefer to pay up-front for their mobile apps, in-app purchases are forecast to account for 48% of all revenue by 2017 - an 11% increase over last year.

Gartner also predicted in-app purchases will account for 17% of developer revenue this year, increasing to a hefty 48% over the next four years.

Although free apps currently make up 60% of the offerings in Apple's iOS App Store and 80% for the Android-based Google Play, the party is expected to plateau after next year.

"We expect strong growth in downloads through 2014, but growth is forecast to slow down a bit in later years," explained Gartner research director Sandy Shen. "Over time [users] accumulate a portfolio of apps they like and stick to, so there will be moderate numbers of downloads in the later years."