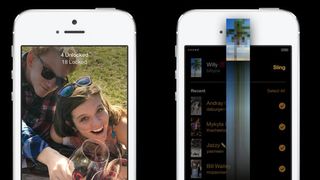 Does that say 'Willy'? Aaaand it's already begun

Update: Well, that didn't take very long. Facebook has officially unveiled Slingshot, and it's setting its sights squarely at Snapchat.

"Photos and videos that don't stick around forever allow for sharing that's more expressive, raw and spontaneous," the Sling team wrote in an announcement post, noting the new messaging platform is aimed at group sharing - snap a photo or shoot a video, then "sling it to a bunch of friends." The rub is they won't see what you've sent until they sling something back to the sender.

If they don't like what they see - that beach selfie made them just too jealous - they can swipe your shot away. Or, they can reply with a reaction, like, "OMG watch out for that wave!" Or whatnot.

The makers of Slingshot even gave a nod to the service's obvious competitor.

"We've enjoyed using Snapchat to send each other ephemeral messages and expect there to be a variety of apps that explore this new way of sharing," the post continued. "With Slingshot, we saw an opportunity to create something new and different: a space where you can share everyday moments with lots of people at once."

Slingshot is available starting today in the US on iPhones with iOS 7 and Android devices running Jelly Bean or KitKat.

Call it a clever bit of hype-building, call it a screw up, but Facebook's Snapchat competitor, Slingshot, made an early appearance on some App Stores last week before vanishing.

But it might be time for Slingshot to make its proper and official debut, with one source telling 9to5mac that today is the day we'll see Facebook roll its app out at some point today.

Remember Poke, Facebook's first attempt at doing the Snapchat thing? Think that but much better. The service will let users send photos and videos - a la Snapchat - to other users, with the option to deface said media with text and drawing.

Perhaps the only real difference is that Slingshot also includes a "react" button that allows users to return an instant snapshot reaction to the latest picture of your friend's lunch.

The app will be completely free when it arrives. The source does say, however, that Facebook may hold back the rollout if it comes up against any last-minute snags.