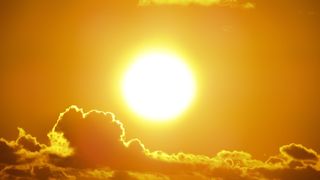 The question of how to reverse, or at least stall, global warming is arguably the biggest problem humanity will face in the 21st century – and with rising sea levels, extreme temperatures, and the depletion of our coral reefs, finding the solution has never been more urgent.

However, one group of scientists may have cracked it  with their research into the propulsion of sulfates into the lower atmosphere with the aim of essentially dimming the sun's light.

In a study published in the journal 'Environmental Research Letters', they examined the tactics and costs of 'stratospheric aerosol injections' – no easy feat considering the material would need to be launched as far as 20 kilometers into the lower atmosphere.

The scientists estimated that this could halve the increase in anthropogenic radioactive forcing – in other words, it could substantially reduce the amount of solar radiation that stays within the Earth's atmosphere instead of being reflected back into space as a result of human greenhouse gas emissions.

The researchers predict that this would cost around $2.25 billion per year, and could be ready to deploy in 15 years – however, there are currently no aircrafts capable of launching the material at these high altitudes.

Furthermore, the study has not examined the potentially devastating effects that dimming the sun could have on other life on Earth; for example, plants and other photosynthesizing organisms may struggle to survive in an environment with less sunlight, which would in turn have huge consequences for animals and insects higher up the food chain.

Although it's unclear whether this kind of technology would ever realistically be adopted, it's apparent that any kind of environmental engineering needs to be approached with caution – after all, the Earth's life-supporting environment is as finely tuned as an expensive wristwatch, and the slightest change to that environment could have enormous repercussions for the entire planet.