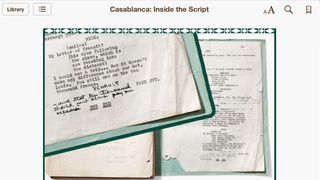 Warner Bros has announced that it will be publishing enhanced movie scripts for some of its most famous titles – allowing fans of films like Hitchcock classic North by Northwest to get their digital mitts on assets for their Kindle, iOS device or Nook.

With digital publishing going great guns, WB is keen to start offering some of its 'rare' archive material to fans.

The 'Inside the Script' offerings – which include Casablanca, Ben-Hur and An American in Paris – are described as 'highly illustrated' ebooks.

"People love movies because of the stories they tell," said Thomas Gewecke, President of Warner Bros. Digital Distribution. "Now we can give fans rarely seen details of how these stories came together and take their enjoyment of films to a whole new level."

The extras are a mixed bag – with something like the North by Northwest 'Inside the Script' offering director Alfred Hitchcock's editing and main title sequence notes, composer Bernard Herrmann's music notes, photos and documents from Alfred Hitchcock's papers, story department photos, storyboards and photos of crop duster sequence, production schedules and daily scene reports along with hair and makeup tests and costume sketches.

If you are a huge fan of the movie being inspected then it sounds like an attractive proposition – although at £6.49 per title the ebooks do come at a cost.