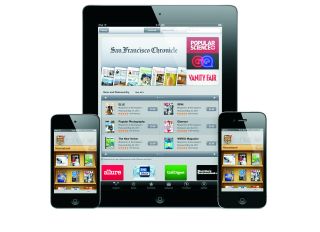 The first update is for notifications, with push notifications now aggregated in a pull-down menu available at the top of the screen... much like the system used for Android. This is also accessible from the lock screen, with a simple swipe gesture taking you straight to the relevant app.

These notifications will pop up at the top of the display in full-screen mode, but are not persistent, meaning they'll dismiss themselves after a few seconds if you're too into your current Words with Friends war.

If all these pesky words are too much for you, why not try the snazzy video run-down of the new features that our colleagues over at T3 have put together:

Bouncing onto the News Stand

Magazines are going to get their own section of the new iOS 5 launch, bringing with it a dedicated home screen pop-up from the app icon.

This means that your new subscriptions are automatically downloaded to the phone and available offline, with more titles being announced each day.

Apple clearly thinks Twitter has become mainstream enough to be part of its iFamily, with a 'one click' option for applications to let you use Twitter functionality.

All you'll need to do is sign in through the Settings menu and any app can request integration with your Twitter account, meaning no more constant signing in to every new application you download - meaning Twitter is set for a big boost in app love.

Twitter will get some strong integration across the iOS device, with the ability to Tweet from the Camera, Photos, Safari and Maps applications - and like Android, Twitter contacts can be added into the Contacts menu.

Safari Reader - nothing but the words

Safari has been given some big upgrade love with the new iOS 5 - the big one being the new Safari Reader.

This function lives in the address bar, and turns any web page into a long column of text for easier parsing. This text can then be emailed in its entirety, in a move that will please website owners the world over.

Reminders might not seem like much of an update for iOS 5 - after all, it's just prettier versions of lists of things you have to do.

But add in things like time, date and location notifications (meaning you can set up a 'geofence' according to Apple that will prod you to do something when you leave a certain zone) and you can see this is something that might actually add in some cool functionality - plus it will sync across other apps like iCal.

Apple is claiming that its camera is one of the most oft-used pieces of hardwaer on sites like Flickr, and has updated the functionality accordingly.

The big one is the addition of a camera icon on the lock screen, meaning you can shave all-important seconds off the snapping time if you see something you want to capture.

Plus you can use the volume up button to take pictures. We know, a dedicated camera button for the iPhone! Wishes clearly DO come true.

Extra photo editing software for easy cropping and enhancement has been added in to iOS 5, and pinching to zoom will, well, zoom in on photos when you're trying to capture the perfect pic.

Next up in the Apple iOS overhaul is the Mail application - with new elements like draggable addresses so you can pop them across from To to Cc to Bcc.