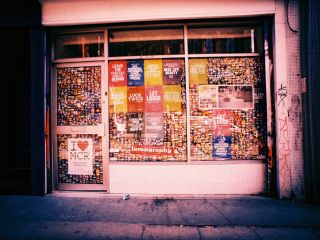 Everything that's happened this week in the world of photography

As we edge ever closer to Christmas, we're seeing fewer big releases from the camera giants, but there's still plenty to keep us occupied as a new memory card format has been unveiled, DSLRs have been banned from a popular tourist destination and Sony NEX users get a couple of new lenses to play with.

Elsewhere, we've been questioning the AF sensitivity of the new Canon EOS 1DX and taking a sideways sweep at all the recent glut of camera adverts that have been clogging up our tellybox.

So sit back, relax, and indulge in this week's camera news, each with links to the full story.

It's a good week if you're a Sony NEX user as not one, but two news lenses have been revealed for the compact system cameras. First up, Tamron introduced a new superzoom 18-200mm lens, while SLR Magic revealed the super fast 23mm f/1.7 lens.

When the Canon EOS 1DX was announced earlier this year, it was revealed that it was replacing both the top of the line models, the 1Ds Mark IV and the 1D Mark III. But, as Jeff Morgan reveals, there's one element of the new camera that not everyone is altogether keen on, and that's autofocus sensitivity. Read on to add your own thoughts and opinions.

Just as we've finished organising our memory card holder, the Compact Flash Association has gone an introduced a new format on us. The XQD card will be ever so slightly bigger than SD cards (time for a new camera then, perhaps), but will have increased read and write speeds. Fancy.

There we were banging on about not many releases happening, Leica goes and throw us a curveball by introducing the V-Lux 3. The 24x optical zoom bridge camera also features a 12.1 million pixel sensor, flip out screen and of course that ever so important little red dot. Don't bother adding it to your Christmas list, as it's not out until January.

Good news Northerners! Yes, it's what you've all been waiting for... your very own Lomography store. The analogue sensation has finally made its way to the beautiful city of Manchester, the very first one outside London.

It probably wouldn't be the week in cameras without a bit of Olympus news. It's more updates on the scandal that has rocked the company since it sacked its CEO back in October. An independent commission has revealed that it is "rotten to the core", while Michael Woodford is planning a trip back to Japan in a bid to sort things out. Well, he was hardly going to choose it as a holiday destination, was he?

The photography world was left reeling on the weekend after the atrocity that was DSLRs being singled out for a ban at a disused London underground station, which is now a £20 a pop tourist destination. It seems that the high quality sensors were just too much to bear for the museum, who later claimed that it was a "health and safety" issue that was the real reason for the ban. Cue hundreds of voices of disbelief - add yours to our article now.

Have you noticed more and more camera adverts creeping into your viewings of I'm a Celebrity! (or other such gubbins) lately? Well, we have - though we suspect our ears are predisposed to pricking up at the sound of the word "megapixel" - and we've gathered them all together in one place to give you the lowdown on whether or not any of the cameras featured are worth your well-earned pocket money.

That's all for the week in cameras this week, next week is the deadline for Olympus to declare its earnings or else face delisting from the Tokyo exchange. Will it survive? Stay tuned to find out...